Kevin Smith, an unknown pro from Melbourne’s Waverley Golf Club, has upstaged a handful of Tour winners to take a one shot lead into tomorrow’s second round at the Victorian PGA Championship.

Smith carved up the Legends layout at Moonah Links firing six birdies, including five in the space of seven holes, against a lone bogey to card a 5-under 67 and hold out the likes of Peter Lonard, Dimi Papadatos and Michael Sim. 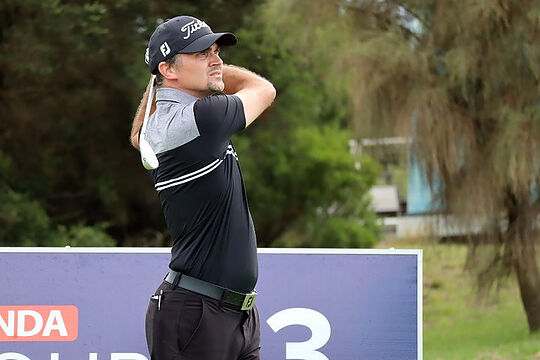 “It was just dumb luck. It could be the absolute opposite tomorrow. I finished fourth to last or something here last year, so if I improve on that, I’m happy,” said Smith, who earned his spot this week thanks to finishing in the top three at the recent PGA Professionals Championship of Victoria.

“It was windy. But the course is awesome. You see it pretty early on and as long as you get the ball rolling on line it’s not going to miss. The greens are so good.”

Reigning Australasian PGA Tour OOM champ, Brad Kennedy, was quick to knock off any rust accumulated from three months resting at home with his family, firing a 2-under 70 to share 16th place.

Play will resume tomorrow morning from 7:15am.