He may have won $54 million and 11 PGA Tour titles but it now looks Sergio Garcia wants out.

The fiery Spaniard let fly at officials after being called out for the length of time it took to find his ball, which Garcia had driven into tall grass lining the par 4 10th hole during the first round of this week’s Wells Fargo Championship. 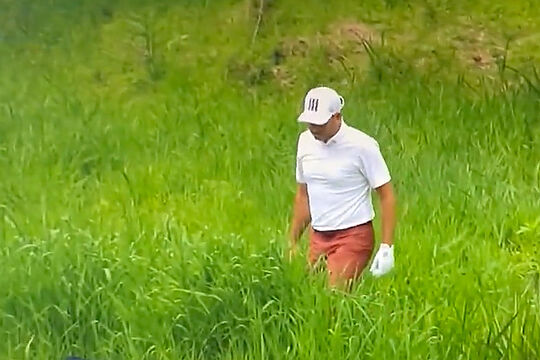 Garcia searches along the 10th hole for his ball (Credit: PGA Tour)

It all comes down to a PGA Tour rule that states a player has just three minutes to look for their ball before it must be marked down as lost and the player is docked a one-shot penalty. However, the subjectivity surrounding the rule is what upset Garcia.

The stopwatch begins when a player starts their search but as Garcia rightly pointed out, when exactly did he start looking for his ball.

Garcia was understandably confused when a rules official informed him that it actually took him four minutes to find his ball and therefore it is technically lost.

This is where things went quickly south.

“I can’t wait to leave this tour,” muttered Garcia before taking his drop and making a bogey five.

“That’s absolute bulls##t. I cant wait to get out of here…just a couple more weeks until I don’t have to deal with you any more.”

Maybe it was just the frustration talking but with just a month to go before the first Saudi-backed tournament tees off in London, it seems the 42-year-old might have let the cat out of the bag about his future intentions.

He’s not the only player looking to cash in on the huge sums of money on offer either. Names such as Phil Mickelson, Adam Scott, Ian Poulter and Lee Westwood have been rumoured to play for the approx. US$4 million first prize at each tournament.

“It does feel like the disquiet with many players & the PGA Tour is getting louder now players have an option. Sergio Garcia has always been an emotional person, but this is alarming. LIV Golf is gaining momentum by the day. The next month is pivotal for tournament golf,” tweeted commentator Luke Elvy about what is beginning to be a major issue for the PGA Tour.

Even Australian PGA champion Jed Morgan, who just earned his DP World Tour card as the winner of the Australasian PGA Tour Order of Merit, is getting in on the action stating that he will one of those lining up at the Centurion Golf Club on June 9th.

And who could blame him with last place at the US$25 million events receiving close to the entire purse on offer at some of this season’s Australasian Tour events.

UPDATE: Following a review by the PGA Tour, the match referee was found to have made an error with regards to the time penalty.

“Subsequently, the Rules Committee reviewed video from the situation after the ruling and discovered the inadvertent error by the referee who was not aware the player was not searching for the ball on the other side of the creek,” said the PGA Tour in a statement to the media.

“To clarify, the time spent by Garcia trying to access the other side of the creek should have delayed the start of the search time clock, and the ball would have still been “in play” if not for that error.”

“Garcia was informed of the developments following his round. Under the Rules of Golf, Garcia’s score does not change despite this clarification.”