US Open ticket for Aussie Order of Merit winner

Australian PGA Championship winner, Jed Morgan, could be on the way to his first major if he remains on top of the ISPS HANDA PGA Tour of Australasia Order of Merit at season’s end.

News of the US Open exemption was announced by the USGA with regular qualifying events being compromised for international players due to COVID travel restrictions. 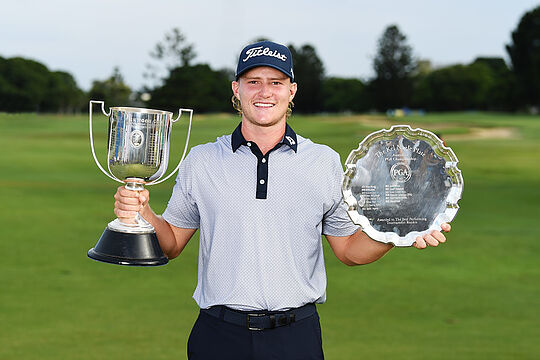 Morgan leads the Order of Merit thanks to his Australian PGA win (Credit: PGA Australia)

The USGA says the exemption is only a temporary measure.

Queensland’s Morgan, who won the Australian PGA last month by eleven shots, is sitting $73,000 ahead of his next rival, Andrew Dodt, with six events remaining before the 2021/2022 season comes to an end at the NT PGA in early May.

However, with the largest purse on offer only $400,000 (NSW Open) someone will need to dominate the events over the next few months to take Morgan’s crown.

“The PGA of Australia and PGA Tour of Australasia are here to provide a pathway to the game’s greatest events around the world and we are thrilled to see that our Order of Merit winner will now play in this year’s US Open,” said PGA of Australia CEO, Gavin Kirkman.

“The US Open is one of the most celebrated championships in all of golf and to have one of locally-based players taking part will create an even greater level of interest here in Australia this year.”

The last Aussie to win a US Open was Geoff Ogilvy in 2006 at Winged Foot following the infamous final hole meltdown by Phil Mickelson. David Graham was the only other Australian winner of the title in 1981 at Merion Golf Club.