US rally late on day two, Internationals stay ahead

The Internationals are still ahead at the Presidents Cup following day two’s play, however the momentum may have swung slightly in favour of the US, who now sit just three back.

At the halfway mark today, things looked liked going all the Internationals way but several of the US pairings had other ideas with Patrick Cantlay and Justin Thomas and late entry Rickie Fowler all sinking key putts to grind back 2½ points for their team.

The Internationals closed the day with 6½-3½ lead and will need a strong showing on Saturday to build a winning buffer going into Sunday’s final sessions.

History is certainly on the Internationals’ side as this is just the third time they have led after the first two days and the three-point leading margin at this stage is their second-largest in the Cup’s history. Royal Melbourne is also the scene of their one and only victory in the history of the Presidents Cup.

While Internationals captain Ernie Els was disappointed with the late play from his team today, he said the team will take a lot out of the late mistakes.

“They have put a lot of work into this and it’s been quite a week already. This was probably good for them, showing what can happen the last couple holes, said Els.

“Saying that, we’re in the lead. The Americans played wonderfully on the 18th hole and all credit to them. They stuck to it and they grinded it. My guys learnt a lot from this afternoon. We won’t let this happen again.” 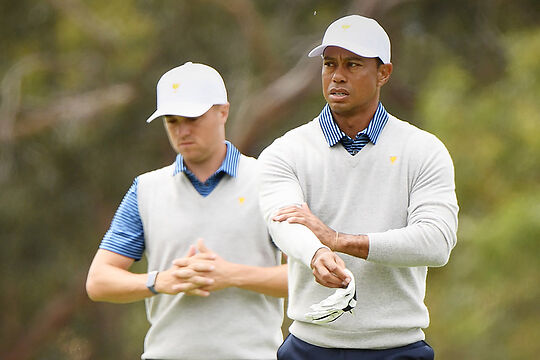 US team playing captain, Tiger Woods, knows how important those final results were to set up a winning run to the Cup come Sunday.

“Yeah, at one point, we were down in four and even in one, and so it looked pretty bleak, but the guys turned it around. They played phenomenal coming in. It was important for us to end the way we did and it totally changed the last hour.”

Woods once again proved to be correct in his decision to play this week. He paired up with Justin Thomas for a second day to secure a win.

Day three will see two sessions, with four matches in each session with the first one being better ball and the second, alternate shot.

Tomorrow’s results for either team will be important heading into Sunday. Can the Internationals set up an unassailable lead or will the US dominate and level things up?