The USA trailed early on day one of the Presidents Cup but rallied to lead 4-2 after the six foursome matches played today at Royal Melbourne.

Adam Scott and a solid KJ Choi caused the major upset of the day when they decimated Tiger Woods and Steve Stricker 7&6, tying the record for the biggest loss in the history of the event. 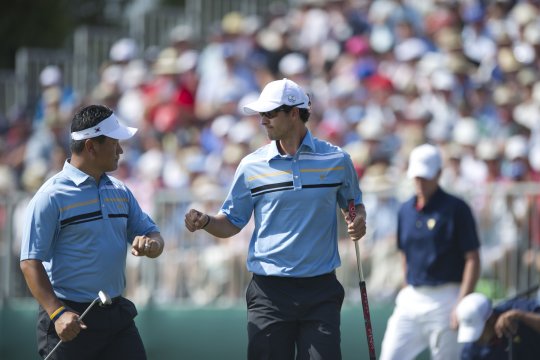 Adam Scott and K.J Choi celebrate a win in the opening Foursome match against Tiger Woods and Steve Stricker at the Presidents Cup. (Photo: Anthony Powter)

Woods and his former caddy Steve Williams, who now carries the bag for Adam Scott, moved to defuse tension early, shaking hands at the first tee before their opening match.

Hunter Mahan and David Toms almost made up for the Woods-Stricker disaster when they took apart Koreans, KT Kim and YE Yang, 6&5.

Earlier Webb Simpson and Bubba Watson got the US team off to a winning start when they scored the first victory of the day with a 4&2 win over Ernie Els and Ryo Ishikawa.

The second grouping of Geoff Ogilvy and US Masters champion Charl Schwartzel were unlucky, after leading Bill Haas and Nick Watney for most of the day.

They surrendered the 15th to level the match, which eventually was halved, giving each team half a point.

Aaron Baddeley and Jason Day led easily until the match tightened at the close when Dustin Johnson and Matt Kuchar took the 17th and 18th to halve the contest.

Phil Mickelson and Jim Furyk’s 4&3 win over Retief Goosen and Robert Allenby sealed the final point for the Americans.

The USA is striving to win their fourth successive Presidents Cup trophy, though Royal Melbourne is the venue of their sole loss back in 1998.

The defending champions set up previous President Cup victories by winning their opening foursomes in Montreal (2007) and San Francisco (2009) and again have the early advantage over the Internationals.