The 18 year old prevailed in a six-way play-off against Koreans So Yeon Ryu and Hee Kyung Seo, Americans Brittany Lincicome and Stacy Lewis and Paraguay’s Julieta Granada for her first win as a professional and on the LPGA Tour. 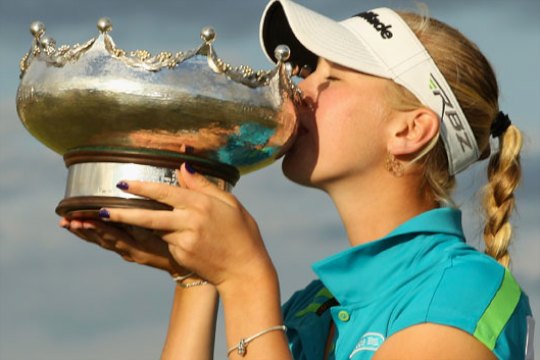 “I was thinking really clearly. I had one concept in my head…I was really calm. I knew what the putt did because I’d had it before and it did not move. I was a little higher up and more to the right. I knew the line and I knew the speed. All I had to do was just hit it. It started breaking. I thought, Oh my goodness no, don’t lip out, don’t break too early. I don’t even know what side of the hole it hit. I was overwhelmed by everything,” Korda said.

Korda said she had worked hard over the American winter to be ready for 2012.

“A lot of the hard work I put in, in the off season, all the times I was down last year, it is all worth it. It made me grow up. It made me realise that you’ve got to change your life to live out here and this is proof. I know that all the hard hours I put in and will keep putting in are really worth it – every moment,” Korda said.

All six players made par on the first extra hole. On the second, Lincicome, Lewis, Granada and Seo made par while Ryu had a bogey.

Korda’s win is the second for the Korda family in Melbourne – her father Petr won the Australian Open men’s tennis title in 1998. Korda junior pockets a cheque for US$165,000 for her victory.

“When we spoke on Monday, Dad said Melbourne had been good to him. As I was walking around here, there was a Melbourne sign on every green. It made me smile because it reminds me of the good times. I love watching Melbourne tennis. I watched all the time. It is a really special place for my family. For my first win, I honestly could not have thought of a better place,” Korda said.

She finished the championship with a final round 1-over par 74 to be at 3-under par.

Korda is projected to jump from 285th to 30th in the world rankings and becomes the sixth youngest winner in LPGA Tour history and the fourth youngest to win a 72-hole event.

She is the first American to win the Women’s Australian Open since Debbie Austin in 1978 at Manly Golf Club in Sydney.

Korean Jenny Shin finished in seventh place at 2-under par while American Katie Futcher and World Number 1 Yani Tseng tied for 8thplace at 1-under par.

Nikki Campbell and Sarah Kemp were the best placed Australians in a tie for 12that 1-over par.