Team USA has claimed the 41st Ryder Cup with a 17-11 victory over Europe at Hazeltine, in what was a true team effort and the biggest defeat suffered by the Europeans since 1981.

Europe had won eight of the last 10 Ryder Cups since 1995, losing only in 1999 at Brookline and 2008 at Valhalla, yet this Ryder Cup had proven different. 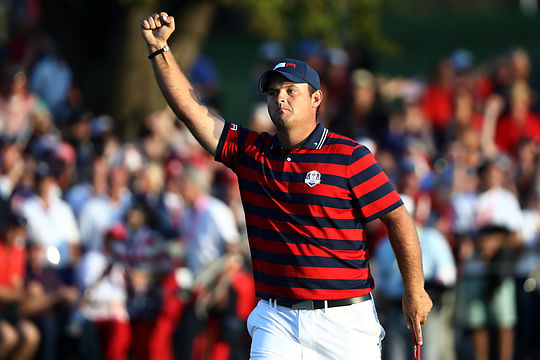 There was no meltdown like Medinah four years ago, when the Americans blew a 10-6 lead. Instead the Americans kept the Europeans out of the picture with a number of stellar individual performances.

It was Ryan Moore, the final captain’s pick who wasn’t named in the team until a week ago, who delivered the cup-clinching point.

Moore finished eagle-birdie-par for a 1-up victory over Lee Westwood, to give the victory to the Americans. Moore had earlier secured a crucial point in four-ball Saturday afternoon before Sunday’s triumph that left him with a 2-1 record in his Ryder Cup debut.

Also at the forefront of the American victory on Sunday was Patrick Reed, who set the tone by defeating Rory McIlroy in the opening match.

Reed, 26, has never won a major championship but has emerged as one of America’s most valuable Ryder Cup players, not to mention its most passionate. He improved his career record in the event to 6-1-2.

The Ryder Cup is not a major championship, but it is nonetheless filled with the pressure-packed moments that mark the biggest individual tournaments in the game.

This Ryder Cup had everything from brilliant golf to raw emotion. It was entertaining and thrilling to watch.

Phil Mickelson went 2-1-1, as his halved match against Sergio Garcia produced some of the best golf of the week. Four of Mickelson’s 10 birdies came within the last five holes. Not to be outdone, Garcia birdied the last four.

Between them they had 19 birdies and just a single bogey. Both players shot 63 and it was fitting that their match ended in a tie.

Earlier, Mickelson and Rickie Fowler earned a victory over Rory McIlroy and Andy Sullivan in foursomes. Fowler had also accounted for Justin Rose and his wins this week have cemented him as a true Ryder Cupper after being a Captain’s pick this week.

He had played in two Ryder Cups prior, both US losses, never winning a match. His record was a dismal 0-3-5. That’s changed after Hazeltine.

It may have turned out that when Moore clinched the winning point, there were still three matches on the course that had not yet finished, including more USA victories that were just waiting to happen.

This time for the USA there was no choking, no grabbing defeat from the jaws of victory, no folding under the intense international pressure of the Ryder Cup, instead it was a classy show which had USA securing the largest margin of victory in this biennial event in 35 years.