The USA continued to maintain its lead as the third round was suspended at the weather-shortened 2012 World Amateur Team Championship.

USA is at 24-under par for the championship through the first seven holes of the third round and was eight strokes better than defending champion France, which had all three players complete seven holes and was at 16-under. 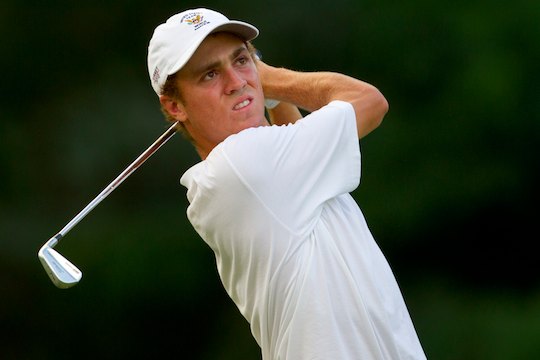 Australia are well out of the championship currently in a tie for 22nd position with a 1-over par combined total with Cameron Smith the best of the Aussies at 2-under-par and in a tie for 31st position in the individual standings.

Matt Stieger is at 3-over after two completed rounds, with Daniel Nisbet at 12-over.

The 2012 championship was shortened from 72 holes to 54 holes following a weather delay that allowed only six teams to finish the second round on Friday.

The second round was completed Saturday with the USA holding a six-stroke advantage over the Republic of Korea with its 36-hole scoring mark of 266.

World number one, American Chris Williams, is at 14-under-par and leading the individual standings with teammate Justin Thomas, number three in the world, currently in a tie for 5th at 8-under.

Thomas, a quarter-finalist at this years Western Amateur said the Americans like their position on the scoreboard but will not be complacent.

“There are 71 other teams that would like to trade places with us,” said Thomas.

“We are in a good spot but we’ve got to keep building the lead.”

Steven Fox, the 2012 US Amateur champion was even par through seven.

“It was solid play but there were not as many birdies,” said USA captain Jim Vernon.

“The play was solid. There is still a lot of golf to play but we are in the best position. I think with a good night’s sleep they will come out and perform great.”

New Zealand is showing up the Aussies to be currently in a tie for 16th position at 2-under in another stellar performance in these championships after finishing 4th two year’s ago in Argentina.

This is another disappointing showing by an Australian team after a below average performance two year’s ago where we finished 26th.

The European and American teams continue to perform well as Australian teams falter in these bigger international events. This is despite considerable resources being allocated to our elite players to ensure we prepare our teams in the best possible way to compete on the international stage.

Yes, it can be viewed as a ‘work in process’ and hopefully the results will following in the course of time.

On Sunday, the USA will be vying to win its 14th championship and first since 2004 and there appears nothing will stop the American machine in Turkey.

In Australia’s case it becomes an analysis of how we can improve.