The Internationals are locked in a tight battle to remain alive in the Presidents Cup at Royal Melbourne midway through the final day.

With all 12 singles matches underway today, the International team held a 6-4 lead by mid morning. 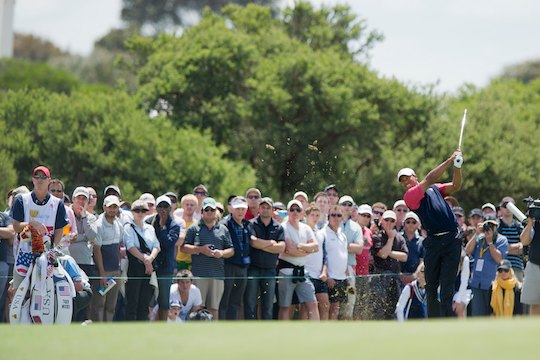 Adam Scott came out of the blocks firing to be 3-up against American star Phil Mickelson. At the turn the Australian commanded a 3 hole advantage.

Young Japanese Ryo Ishikawa was another International standout, holding a commanding 4-up lead over American Bubba Watson at the 14th.

However Jason Day was suffering at the hands of Hunter Mahan.

Mahan never letting Day into the match and was 5-up through 10.

US veteran Jim Furyk continued his fine form on the last day as he nailed down South African Ernie Els, to a 3-up lead with seven holes played.

Els’ compatriot, Retief Goosen, however, was narrowly ahead of American Matt Kuchar, thanks to a holed pitch shot at the sixth.

Tiger Woods was giving Aaron Baddley a lesson in match-play, as was 4-up through 12.

Steve Stricker was ahead of Y.E.Yang 2-up through 12.

The US took a 13-9 lead into the final day, leaving the Internationals with an almost impossible task to win the competition.