Tiger Woods did his captain proud as the USA retained the Presidents cup with a 19-15 win over the Internationals.

Woods had the honour of closing the deal for the USA on the 15th at Royal Melbourne after splashing out of the greenside to within 1 meter to clinch a 4&3 win over Aaron Baddeley. 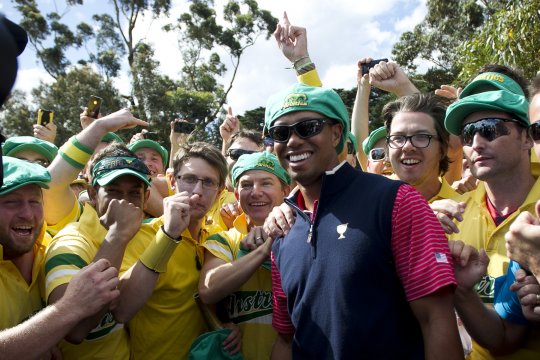 Tiger Woods is all simles with the Fanatics after the USA won the Presidents Cup at Royal Melbourne. (Photo: Anthony Powter)

Woods was five-under for his 15th holes to pull away from Baddeley who really did nothing wrong – the Aussie was simply outclassed by the resurgent former world No.1.

Hunter Mahan gave the Americans their first point when he disposed of Jason Day 5&3 in the fifth match.

The Internationals then clawed back with wins by Geoff Ogilvy over Bill Haas, 2-up, Charl Schwartzel against Dustin Johnson, 2&1, K T Kim over Webb Simpson, 1-up and Ryo Ishikawa beat Bubba Watson, 3&2.

Retief Goosen defeated Matt Kuchar, 1-up, for the other International point.

Adam Scott was nothing short of stunning as he led the experienced American Phil Mickelson 4-up with only four to play before winning 2&1.

No team has ever won the Presidents Cup from behind going in to the final day. The Internationals needed to craw back a 4 point deficit with the score being 13-9 moving into the final round.

Nick Watney moved the US closer to victory with a 3&2 win over K J Choi.

David Toms, playing in the third last match, smashed an out-of-form Robert Allenby 7&5, effectively shutting the gate on the Internationals.

Jim Furyk then defeated Ernie Els 4&3 to be the only play undefeated in the series with a 5-0 record. Steve Stricker then accounted for Y.E. Yang 2&1 for the USA victory.

But it was Woods who delivered the knockout punch to the International team and in the process silenced critics of his early Presidents Cup selection by captain Fred Couples.

Couples was the first man to rush onto the green to celebrate.

“For Tiger to get the winning point makes us feel very good as a team,” Couples said after celebrating his second win in charge of the U.S.

“He was ready to go this whole week. He was ready for a month. I lot of people asked me why I picked Tiger and questioned how he was going to play. We saw how Tiger can play today.”

Without a tournament win in two years after off a year plagued with injury and struggles to master his re-engineered swing, Woods looked like the Tiger of old against Baddeley.

Woods finished 2-3 for the tournament after being the only USA player to fail to score on the first two days.