Victorian Daniel Valente fired a bogey free 7-under 64 to take the first round lead at the South Pacific Open Championship at Tina Golf Course.

Valente is one shot clear of Web.com Tour player James Nitties and the in-form Matt Millar, who so far this year has finished in the top-10 five times including a win at the NZ PGA Championship. 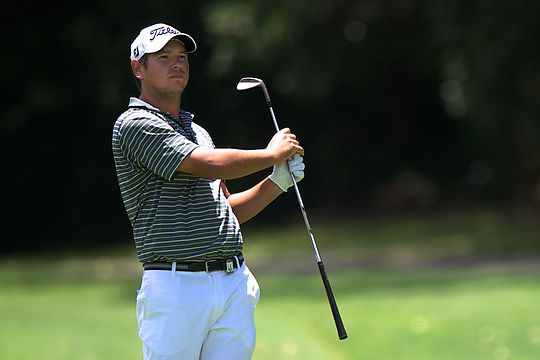 “I played really good obviously to have 7-under, I hit the ball really well and holed some putts,” said Valente.

“It all sounds pretty boring and mundane but just try and keep it one shot at a time. There are still three rounds to go, a long way, but I am in a good position, everyone wants to be leading.”

“I feel like I play the course well, my strategy is good and the course is in nice shape. It’s a lot firmer than last year so you have to play it, not more defensive but with less drivers.”

Sitting a further shot back on 5-under the card are Jared Pender (NZ), Matt Guyatt (QLD), Michael Wright (QLD) and Daniel Popovic (VIC) who is returning from five months on the sidelines due to an ankle injury.

The other story line of the day belonged to Callan O’Reilly who was forced to tee it up with borrowed clubs after his failed to arrive in New Caledonia. He had been 4-under the card early in the round but a costly error incurring a penalty saw him finish on 1-under 70.

The second round of the South Pacific Open Championship will tee off at 6.40am.