Van Zyl began the final round with a one-stroke lead and finished strongly to shoot a three-under-par 69 and post a 14-under-par winning total, finishing two shots clear of Hennie Otto. 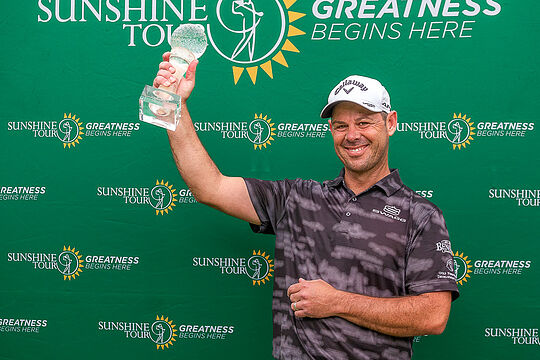 The win was Van Zyl’s, 43, sixteenth Sunshine Tour victory and moved him to 14th on the Luno Order of Merit.

“I’m over the moon with the win, it’s been a rocky road and I’ve been fighting a lot of demons,” said Van Zyl. “So it’s a real sense of accomplishment. In golf, it’s a case of how well you are doing both on and off the course, and I can sense I am on the right track.”

Van Zyl has predominantly focused on the South African and European Tour and all his professional title have been on the Sunshine Tour. In 2007, van Zyl played on the PGA Tour, having gained his card at the 2006 qualifying school. He made the 36-hole cut only four times in 21 tournaments during his rookie season and finished 227th on the money list.

In January 2017, van Zyl was defeated in a sudden-death playoff on the European Tour for the second time. He lost to Wang Jeung-hun at the Commercial Bank Qatar Masters, who birdied the first extra hole to defeat van Zyl and Joakim Lagergren.

As an amateur he won the 2000 South African Amateur before turning professional in 2001. His first victory came at the Platinum Classic in 2005.