Varner III first landed his second shot into the downwind par-5 18th just on the front edge of the green in two before putting to a pin located at the back left corner on the Royal Greens course.

The American, one behind on the final tee, just needed to two-putt the last to ensure a play-off.

What happened next was remarkable with Varner III’s 92-foot putt finding the bottom of the cup for an eagle ’3′ handing him a round of 69 to win by a shot at 13-under. The new World No. 44 was clearly excited bouncing around the green and into the jubilant arms of his English caddie Chris Rice.

Looking for his first victory since the 2018 Travelers, Watson had earlier set the clubhouse lead in landing a downwind 65-degree wedge to 12-feet at the last also for an eagle ’3′ to seize the lead with a score of 64 and a 12-under total. 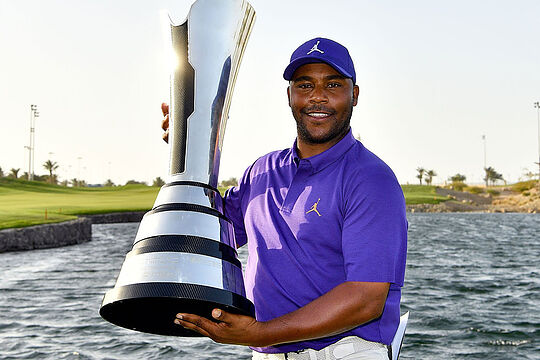 Rather than being upset by his loss, the 43-year-old Watson jumped for joy when Varner’s putt dropped and immediately raced out to greet his good mate. The pair then walked side-by-side to the scorer’s hut ahead of the prize presentation where the enormity of Varner III’s second only success since capturing the 2016 Australian PGA title was beginning to sink in.

“That last putt was just awesome and I felt sure when it rolled down the hill towards the flag that in a worst-case scenario I would just putt out for a birdie and we’d go to a play-off and I’d get him [Watson] there”, said Varner III.

“And then it went in, and emotions came out. I love that. When I play with my boys, that’s the emotion I want to see. That’s why you play. Competition, it’s the greatest thing in the world.”

“It’s just awesome to win and it’s been pretty crazy since it happened, and I am just trying to take it in.”

Watson, while disappointed not to have won, was genuinely excited for his friend with the duo having spent many a night at the official hotel this week in the company of each other.

“He’s new — when I say new, we know Harold, but it took me — it was five years until I won my first. So this is a guy that’s just starting to play better and better each year. We see his name a little bit more. He’s getting comfortable. He’s won before down in Australia, so just so happy for him.”

Spain’s Adri Arnaus, who had been threatening all week, dropped from second to third place on 10-under following a disappointing final round 71.

Another stroke back on 9-under and equal 4th were Steve Lewton and Australia’s Cameron Smith. The Queenslander opened with a pair of 66′s but was let down by his putting.

“I struggled on the greens all week. I felt as though I was hitting good putts, and I just couldn’t get them to drop this week. A bit disappointing that I came pretty close, but it is what it is. It’s golf.”

Brad Kennedy was next best of the Aussies in a share of 14th place alongside Open champion Shane Lowry and young Japanese star, Takumi Kanaya.

The 47-year-old Kennedy, who was named Player of the Year at last month’s Greg Norman Medal celebrations, enjoyed a solid week in the Saudi Kingdom with his second round 72 the only blemish at the Royal Greens Golf and Country Club.

Despite the controversy surrounding the first staging of the Saudi International under the Asian Tour banner, it was an exciting week of golf with a diverse field that produced a nail-biting finish. What else could you ask for?