American Johannes Veerman has secured a two stroke win over fellow countryman Sean Crocker and Finland’s Tapio Pulkkanen at the Czech Masters on the European Tour.

Veerman closed with a 68 to finish at 15-under-par to claim his maiden European Tour win from his 59th start, with the 29-year-old’s only other professional victory back in 2016 on the Asian Development Tour at the Taifong Open. 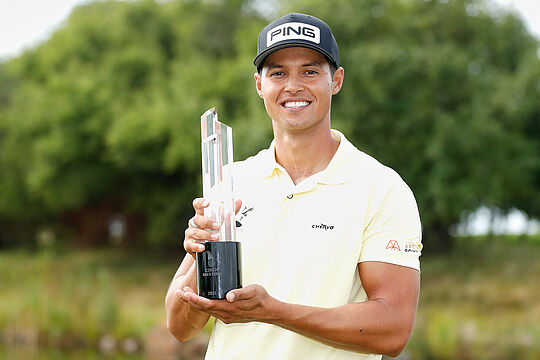 “It feels amazing. I was asked if I could put it into words and I can’t,” said Veerman.

“When I walked off the green I felt relief more than anything. To finally break out and win on the European Tour, it’s a dream come true being a European Tour winner.”

Earlier Veerman had recovered from a bogey on the 2nd with three birdies on the front nine after he started the round in the final group with former British Open champion Henrik Stenson of Sweden and Pulkkanen and was two strokes behind the overnight leader Pulkkanen.

Veerman took a one-shot lead for the first time after opening the back nine with another birdie and added another pair on the 12th and 16th following a bogey on the 11th. Another birdie on the 16th followed by regulation pars on the closing two holes was enough for the victory.

The win was in the making for the former Texas A&M college player. Veerman finished third at the Irish Open in early July, which earned him a spot in the Open Championship. He posted another top-10 at the Scottish Open before going on to make the cut at Royal St. George’s.

Maverick Antcliff was the best of the Australians finishing in a share 29th position at 5-under-par. Jake McLeod finished in 47th position to be the last of the Aussies to make the weekend.