‘Very lucky’ Woods says he has a long way to go

One year ago next week, the sports world was aghast with news that Tiger Woods had been seriously injured in a one-car accident in suburban Los Angeles.

The world saw the totally wrecked state of the Genesis Invitational SUV that Woods had been driving that clearly must have flipped over many times before coming to rest in a gully and well off the roadway. 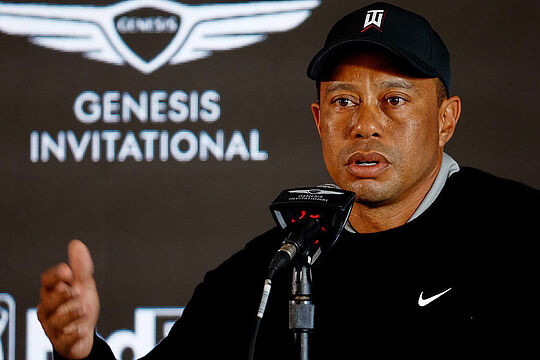 It was not until days later that details emerged of the extent of Woods’ injuries and then we all began to wonder how lucky the 15-time major winner was lucky to have survived.

Woods returned to the golfing arena late last year in hosting the Hero World Challenge in the Bahamas, and saw him with his son Charlie a few weeks later contesting the PNC Challenge in Orlando.

Woods has now made a third tournament visit this week with his Tiger Woods Foundation again playing host to the $12,000,000 Genesis Invitational at the stunning Riviera Country Club in suburban Santa Monica, and a some 40-mile drive north of the near fatal events of 51 weeks ago.

His presence at a pre-Genesis press conference also allowed Woods to publicly thank those who first saved his life, and as Woods strongly referenced, also his right leg.

“I’m very lucky, very lucky”, said Woods. “As a lot of you guys know, I didn’t know if I was going to have the right leg or not. So, to be able to have my right leg still here, it’s huge.”

“I still have a lot of issues with it, but it’s mine and I’m very thankful for that. Thankful for all the surgeons and doctors and nurses that, for all the countless surgeries that we went through and countless rehabs and the PT sessions are brutal.”

With plenty of time on his hands before the later stages of last year when he could start walking again, Woods revealed he spent time reading.

“I read a lot of Dean Koontz books. He’s based in California, so a lot of the places that I’ve been to. I’ve always been a big fan of his ever since high school”, said Woods.

Woods has also kept himself busy with his Foundation as he also explained, and in offering suggestions how those learning the Foundation can also keep focussed.

“Just enjoy working, enjoy putting the time in. If you want to get better, just like what we provide with our foundation and our STEM programs, school’s tough, school’s boring at times, but you find subjects you like and it’s amazing how much your attention span goes up, how much you’re willing to put more effort into it”, he said.

“It’s the same for golf. Finding that passion for practice to prepare to get yourself ready for an event, enjoying the process of it, makes things so much better.”

“As I keep saying, dig it out of the dirt and going out there and earn it on your own. No one’s going to give it to you, you’ve got to go earn it. That earning it, that’s part of the fun.”

“That’s part of the joy of going out there and hitting 500 to 1,000 balls a day and finding it out there because that’s when you start to understand you own it, you own your game, not anyone else’s game. You know what you can and cannot do and that’s what allows — that’s what has allowed me to win tournaments.”

Woods last contested the Genesis Invitational in 2019 when he played the opening rounds alongside Rory McIlroy and Justin Thomas, and while not teeing-up this week, he revealed he will be kept busy.

“We’ve got a lot of meetings scheduled this week”, he said. “Because I’m not playing, I’ve got ample time to do a lot of one-to-one meetings about the future of our foundation, where we’re headed, future donors, trying to get an understanding from not just our board but of the other people who are influential in this area, how can we have a deeper impact in the area.”

“Normally I don’t have these meetings because I’m out there playing against Aaron and the rest of the guys, but this year’s different”.

And most importantly when will Woods be back playing on Tour?

“I wish I could tell you when I’m playing again. I want to know, but I don’t. My golf activity has been very limited. I can chip and putt really well and hit short irons very well, but I haven’t done any long stuff seriously.”