Thailand’s Prayad Marksaeng received his early birthday present when he eclipsed his younger rivals with a final round four-under-par 67 to lift his 10th Asian Tour title at the SMBC Singapore Open on Sunday.

The Thai turns 51 in eight days and with the iconic Singapore showpiece celebrating its 51st edition this year, it was perhaps also appropriate its next winner would be born in the year the event was inaugurated.

Prayad’s closing birdie on 18 proved decisive as it gave him a one-shot advantage and also the clubhouse lead while the rest of the field were still out at the Sentosa Golf Club trying to pip him to the title.

Prayad was eventually crowned the newest SMBC Singapore Open champion after a two-hour wait as no one in the chasing pack was able to mount a challenge and better his four-day total of nine-under-par 275. 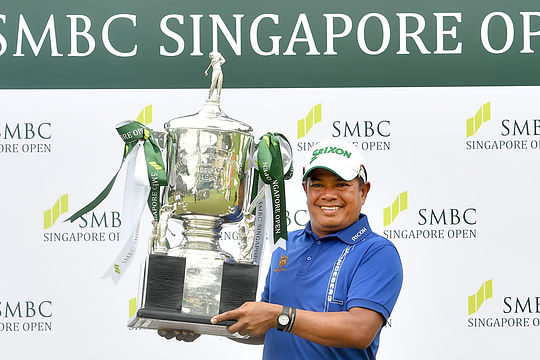 “I waited in the clubhouse for about two hours before I knew I won the tournament. I felt very relaxed, didn’t think too much and just went for my lunch. I watched how the other players played on TV too. I told myself I didn’t need to feel nervous as I have already finished my round. If it belongs to me, it belongs to me,” said Prayad Marksaeng.

“I am turning 51 on the 30th of January. This will be the best birthday present for me.”

Thailand’s Phachara Khongwatmai, South Africa’s Jbe Kruger, Philippines Juvic Pagunsan and defending champion Younghan Song of Korea all had their chances to pip or at least force a play-off with Prayad but that crucial putt in their closing holes simply eluded all of them.

The quartet all finished one shot back of Prayad and shared second place with their 276 total.

World number seven Adam Scott had a round to forget as he signed off with a 74 to finish tied for ninth while Singapore’s Quincy Quek emerged as the best placed Singaporean in tied-26th place.

“I gave myself some chances but I had a couple of bad swings on 15 obviously. I will take about three weeks off before playing in the United States,” said Scott.

“It’s great to come back to play in Singapore this week. The course is looking so good. I thoroughly enjoyed it. It was lovely putting on these beautiful greens.”

Recent Asian Tour Q-School graduate, Todd Sinnott, finished next best of the Australians in a tie for 26th, which was especially impressive after his opening round of 75.