In a significant development, Golf Victoria has signed an agreement with the Ladies European Tour (LET) that will see the women’s event at the 2017 Oates Vic Open co-sanctioned with Europe’s leading women’s professional golf tour.

The Oates Vic Open, to be held at 13th Beach Golf Links from February 9-12, is currently the only professional event in the world that stages both men’s and women’s championships concurrently at the same venue, and this new agreement will add substantial strength to the women’s side of the already prominent tournament. 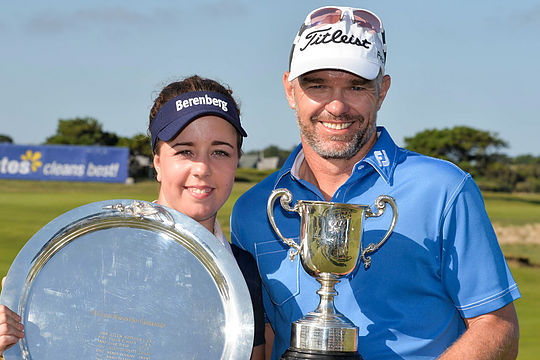 Hall, who was 19 at the time of the victory, brought the tournament phrase “where stars are born” to life, going on to record another eight top-10 finishes in the season.

Golf Victoria CEO Simon Brookhouse is thrilled to have secured LET sanctioning, stating it was a natural progression for the event.

“We’re very pleased the 2017 Oates Vic Open will be co-sanctioned on the LET along with the ALPG Tour and the ISPS HANDA PGA Tour of Australasia on the men’s side.”

“It was always our goal and intention to progress to LET status and we must give special thanks to the Victorian Government for helping us make this happen with the additional funding they announced on December 9 last year at our official launch,” said Brookhouse.

“Being on a worldwide tour like the LET attracts higher ranked players, an increase in world ranking points on offer and provides the potential for a young Australian to secure full LET status with a victory.

While 2017 will mark the first time that the Oates Vic Open has been sanctioned event on the LET, the tournament has been graced by a number of European players in its recent history. The 2016 women’s field played host to 48 LET members, including 8 players who finished in the top 10 of the the event.

The Oates Vic Open will be played 9-12 February at 13th Beach Golf Links.