For almost 20 years, the Vic Open has proudly carried the slogan of ‘Where Stars are Born’ and 2012 will be no exception.

Amongst a host of emerging young players in men’s professional golf are Rohan Blizzard from New South Wales and Victoria’s Matt Griffin. On the women’s side of the ledger are Victorian rookie professional Stacey Keating and teen amateur prodigy Minjee Lee from Western Australia. 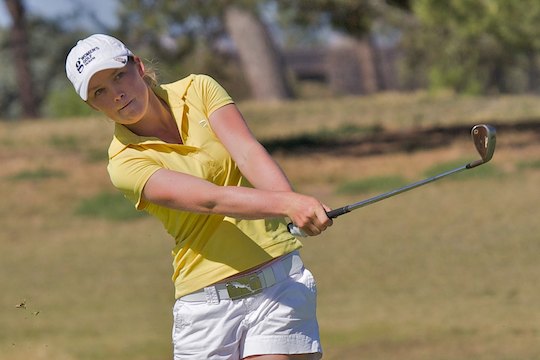 After enjoying a stellar amateur career, Matthew Griffin earned PGA rookie of the year status in 2009 and was runner-up in the 2011 Men’s Vic Open. Griffin then went on to earn his professional win at the 2011 South Pacific Open Championship and recorded a further six top 25 finished including two on the OneAsia tour.

Another young professional in this week’s field to have recorded their first professional win last year is Rohan Blizard. Having claimed the 2011 WA Open in October he also posted six more top 25 finished including one on the OneAsia tour.

Chasing the first Victorian Women’s Open title played since 1992, Keating has enjoyed a great first year on the Ladies European Tour, with six top-tem finishes, 45th place on the money list and 3rd position in rookie of the year honours. To top off her great first season, she was recognised by Australian Golf Digest magazine as rookie of the year.

The 15-year-old Lee from the Royal Fremantle Golf Club continues to compile an impressive amateur record which was highlighted in 2011 by finishing runner-up at the Australian Women’s Amateur after running third in the preceding Women’s stroke play. Lee then teed up against the men at the 2011 Men’s Western Australian Open at Royal Freemantle in November.

Despite missing the cut, the youngster fired creditable rounds of 71 and 78 to highlight her outstanding potential.

Admission to Woodlands for the first round of the Women’s Open is free while entry to all days of the 2012 Vic Open at Spring Valley is just $8 for a daily adult ticket or $15 for a season pass across the four days. Juniors under 18 years of age are free on all days of the Championship.

The 2012 Men’s and Women’s Victorian Opens are proudly supported by the State Government of Victoria and the City of Kingston with major corporate partners Tabcorp, Drummond Golf, Industrial Workforce and Trader Classified.