The Victorians won by a margin of 5½-2½ over traditional rivals South Australia leaving Western Australia and Queensland tied for third place with two wins, two ties and loss each. 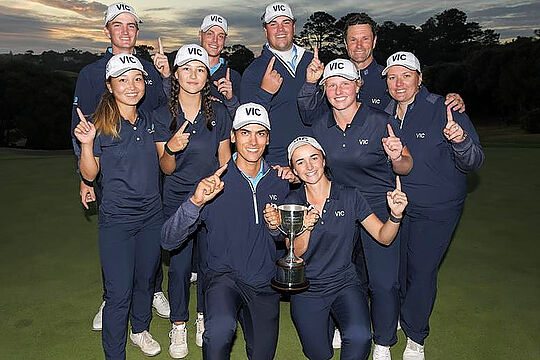 In the individual teams matches, Victoria won their fourth women’s title since 2013 while the South Australian men’s team got their hands on the trophy for the first time since defeating New South Wales at Peninsula Golf Club way back in 1983.

While for the women it was Western Australia and Queensland on 3 points followed by South Australia and New South Wales (2.5 points) and Tasmania again without a winning match all week.

“I’m super proud of them. We did super well the last two days. Everyone performed and I’m super proud of all the boys and girls who played this week,” said co-captain Andre Lautee, who earned a 1-up win over Jack Buchanan with a superb hole-out eagle at the last.

“We definitely believed going into the week that we could win. Obviously there were some strong teams but we always knew that we could do this.”