Victoria has completed an unprecedented clean sweep of the 2015 Australian Interstate Teams Championship titles at Huntingdale Golf Club with a triumphant 5&3 win over Queensland in the men’s championship final.

A day after winning the women’s Australian Interstate Teams Championship at Royal Melbourne and less than a month after winning the Girls’ and Boys’ trophies in South Australia, Victoria rides high on a wave of success and can arguably claim to be the ‘state of golf’ in this country.

With the Queensland team accounting for New South Wales, 4&3, in the round of 6 on Thursday, they slotted a prime position into the final.

All week the Victorians had been labeled the favourites and with good reason. Today the Victorian team bonded as a unit and never let Queensland into the final.

Ryan Ruffles playing number 1 for Victoria was nothing short of spectacular and is an exciting talent to follow. Taylor MacDonald could only watch as he fought tooth and nail in the top-order position. Ruffles was 10-under-par when he capped a sensational 5&3 win over the Queenslander. 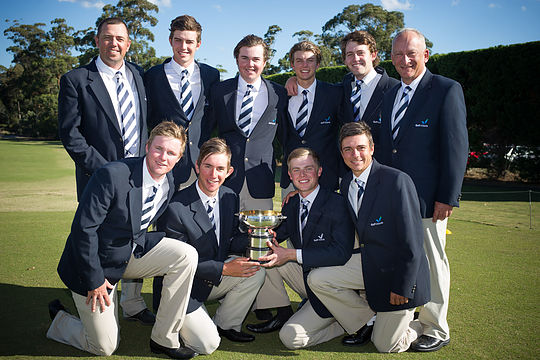 But Ruffels, who also was a member of the winning Victorian Junior team and the reigning Australian Junior Amateur Champion, produced a game that you only see every so often. It was impressive stuff as the 17-year-old peppered the flag all day keeping MacDonald out of the match.

Felton completed a superb week with a 3&2 win over Australian Amateur champion Cam Davis in the No.1 slot following a superb collective 28-under-par for the tournament.

Playing a determined Simon Viitakangas, Eccles swapped holes throughout the day, making a superb recovery on the 18th to get the square and secure victory for the Victorians.

Brett Coletta at number 3 for the Victorians played brilliantly and clawed his way back into his match against Jake McLeod to secure a 3&1 win and is another talent to follow.

Thomas Power-Horan was too strong for Anthony Quayle winning 5&4, whilst Queensland’s Shae Wools-Cobb at number 8 accounted for Andrew Schonewille, 2&1.

In the consolation matches, New South Wales ensured it finished third with a hard-fought 4½-3½ win over Western Australia.

In the playoff for fifth, South Australia breezed past Tasmania 6-2 with Antonio Murdaca winning the top match against Greg Longmore 2&1.