In what was arguably one of the finest Interstate finals for some time with the result coming down to one putt on the last hole in a tense victory for Victoria’s number 1, David Micheluzzi, who pipped Shae Wool-Cobb to give the Victorians a 4-4 result.

The Victorians had been the top-seed having won the most number of contests throughout the week, thereby taking the title in the tie-break final. The Victorians finished with five wins and their single loss coming on Thursday to the home state, South Australia.

“It was certainly close and full credit to the boys and the Queensland team in giving us such a fantastic final,” said Victorian Manager Brain Larsky.

“It was a great final to watch if you’re a spectator, not so much if you’re a Manager. But we knew the Queenslanders would put up a fight and they certainly did.” 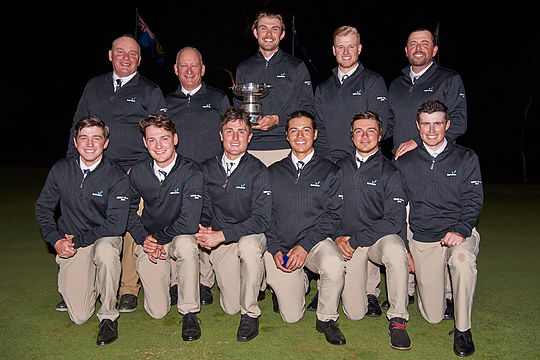 “For us it was a back-to-back victory having won last year in Perth and full credit to a team that not only bonded together well, but played well all week with each team member contributing in their own way.”

There were a number of notable individual performances during Friday’s final.

Queenslanders Charlie Dann, Doug Klein, Jediah Morgan and Louis Dobbelaar were all impressive in winning their matches, with Dann a standout as he peppered the pins with precision iron play to keep Zach Murray out of their match for a solid 3&2 win.

Dobbelaar also recorded a 3&2 victory over Will Heffernan, with Morgan securing his match against Lukas Michel, 2&1. Klein recorded a 3&2 win over Blake Collyer.

The Victorian middle order delivered the results after Darcy Brereton, at number 8, secured the opening match with a 4&3 win over Dylan Gardner. Michel Kyle at number 4 for Victoria nailed an impressive 3&2 win over Lawry Flynn and Matias Sanchez was in stellar form taking out Dylan Perry with a 3&2 victory.

Sanchez, the 2017 Australian Amateur champion, nailed six birdies in a spectacular display that saw Perry also under par for their match.

Western Australia were tied with New South Wales for third, but finished fourth on countback of total matches won after NSW accounted the Northern Territory 7-0 on Friday morning.

NSW record being three wins, a draw and two losses, both to Queensland and Victoria during the qualifying series.

Tasmania finished in 5th position with South Australia and the Northern Territory rounding out the bottom order.