All week NSW had been the team to beat and entered the final undefeated as the minor round champions. All the NSW team needed was a draw to defend the series it won last year in Brisbane.

Yet the Victorian team fought gallantly with the final ultimately coming down to a single match on the final green in the No.3 match to determine the winner, with Aussie Junior champion Cameron John’s birdie putt for a half over Dylan Perry the difference in a 4½-3½ win for the Victorians.

Earlier Matias Sanchez, the 2016 Australian Amateur champion, had secured an impressive 6&5 win over Isaac Noh in the number 8 match to give the Victorians their first match. William Heffernan at number 7 accounted for James Grierson with an important 2&1 win to keep the momentum going.

As with many team match play encounters it is the bottom order which ultimately decides the outcome and it was no different in this final. 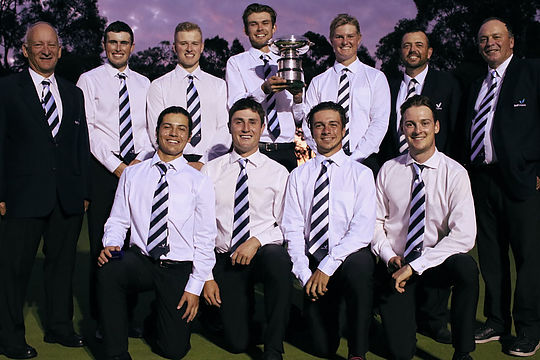 Kevin Yuan at number 4 fought brilliantly to defeat Kyle Michel, 3&2, to spark the NSW comeback. Harrison Endycott finally overcame David Micheluzzi, 3&2, in a birdie-fest at No.2 and in a high-quality top match. Travis Smyth maintained his early edge throughout against Victorian captain Zach Murray to win 2&1.

Just as suddenly, the match was then in the balance at 4-3 and the focus fell on Perry and John at No.3.

Perry was out of the blocks early and led by as many as four through 10 holes. Yet a string of birdies by John had him back into the match. A superb approach into the 18th by John to 80cm then set the stage for the Victorian victory.

Perry also played a brilliant approach to 2 metres but when his birdie putt horse-shoed the cup the opening was there for John.

John made no mistake securing the birdie putt and the needed half for the win.

“I couldn’t feel the putter in my hands,” said John.

“It’s just amazing that it could all come down to that and I was thinking of how much great work all the boys had done to put us in that position, so I was pumped when it went in. I heard all the boys yell and it was just a great feeling.”

Victoria last won the series two years ago at Huntingdale, defending their title it won in 2014 at Federal Golf Club.