The Victorian men’s team has won the Australian Men’s Interstate Teams Matches with a win 4.5 – 3.5 over the New South Wales at Federal Golf Club in Canberra.

The Victorians broke Queensland’s recent domination in these series ending the week undefeated. The last occasion Victoria won the Interstate Series was in 2009 after successfully defining their 2008 title.

“There were no stand out performances by any individuals this week, they all played as a team that bonded well and played well.

Earlier in the week the Victorians accounted for New South Wales 5&2. Despite the solid earlier victory the Victorians were taking nothing for granted in today’s final. 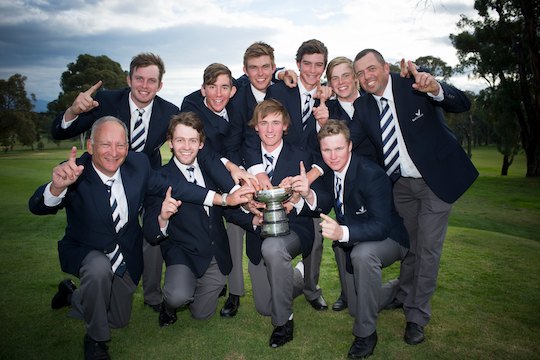 “These matches are always close and anything can happen in match play,” said Lasky.

“We were taking nothing for granted leading into this final. The New South Wales team is packed fully of talent and our guys knew they would have a fight on their hands in the final and needed to play well.

Andrew Schonewille gave Victoria the first win at number 8 with a 3&2 win over Brayden Petersen.

Talented teenager Zach Murray proved his worth at number 5, winning against Jarrod Freeman, 3&2, to bring the final into a balance. When Troy Moses secured a strong 5&4 victory over Lucas Herbert, the momentum had return in New South Wales favour.

The top-order matches were nothing short of classic golf and a layout which was majestically presented and well suited to one-on-one encounters.

Federal’s greens where simply mint, rolling well and with good speed. When the greens are this good, and with players of this quality, the golf goes to another level.

Drakeford’s win meant New South Wales had to win the two top-order matches to secure the victory. Victoria need only one match.

In what was arguably the finest match of the final, Jordan Zunic playing at number 2 pipped Ryan Ruffels 1-up.

At one stage Zunic and Ruffels were at the equivalent of 5-under through fourteen holes. The match went right to the wire with Ruffels’ missed 10 footer putt on the par 5, 17th, after Zunic was in for four, being the match decider.

Zunic displayed some brilliant golf as did Ruffels and it’s matches like these which make these interstate series so interesting.

Davis was in his own battle dealing with back issues and playing clearly in distress during his match against Todd Sinnott. The match was evenly balanced during the opening nine, with Davis hitting half shots and protecting his left side which was causing him discomfort.

Sinnott showed no mercy, booming his drives prolific distances to apply relentless pressure on Davis. At seventeen Sinnott had a four footer to clinch the match but the putt slipped by.

The pair headed down the last with Sinnott producing a majestic flop shot after flying the green to half the hole to win 1-up and deny New South Wales the victory.