In a repeat of last year’s final, defending champions Waverley will meet Kingswood at Cranbourne Golf Club this Sunday to contest the Victorian Division 1 Pennant Flag.

In 2010, Waverley were first time pennant winners defeating the 2006 Flag holders, 4&3, and in the process became the first “non-Sandbelt” club to win Victorian club golf’s greatest prize since Northern Golf Club secured the flag in 1940. 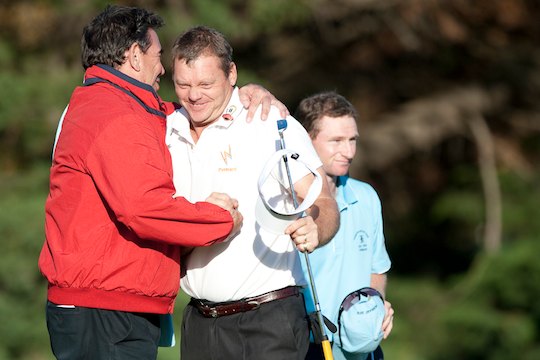 The 2010 final goes down in history for the Waverley team as a final built on determination and commitment. This was reflected no more so than the outcome of last year’s six order finals match between Kingswood’s Blake McGrory and Waverley’s, Michael Rice.

In what was one of the classic club pennant successes for a Club that in 2002 was playing Division 5 pennants in Melbourne.

Memories will return to the Michael Rice comeback where the Waverley number 6 dug deep to overcome a three hole deficit against McGrory to finally take the match on the 18th with a clutch four footer after McGrory had earlier over-clubbed the green.

Rice has competed in this year’s series along with team stalwart, Chris Hanrahan with 70 caps to his credit, as well as Kevin Smith. All were members of the winning 2010 Waverley team.

The team will undoubtedly be drawing upon the events twelve months ago in an effort to secure back-to-back flags.

Jin Jeong has moved to the professional ranks and Todd Adcock has returned to England with Waverley’s top-order positions being replaced by Coupland, runner-up to Cameron Smith at the Australian Amateur and Drewtitt, the recent SA Golf Classic champion.

Drewitt remains undefeated in the Division 1 series with five wins from five starts. Coupland’s played all seven matches in the qualification rounds with a 4&3 win/loss record.

Luke Marino has played for Waverley in the middle order for a 4&3 win/loss record and has been supported strongly by lower oder players throughout the season.

Western Australian, Ryan Peake, is an other with an undefeated series record and is off a runner-up finish at last month’s Mandurah Easter Amateur, while Fellow Western Australian state player and 2011 Lake Macquarie Amateur champion, Brady Watt, has rounded out the Waverley seven this season.

Waverley heads into Sunday’s final with a 6-1 winning season record, but were lower on games than Kingswood, with their five wins and 34 matches compared to Waverley’s 29 matches.

The Kingswood order certainly packs a punch and is a team with considerable more Club Pennant experience that Waverley with Tim Burton, Anthony Houston, Terry Vogel and James Zappelli having more than twenty caps each for their club.

At 42, Vogel is a seasoned campaigner with Victorian Club Pennants and has 31 caps to his credit with Kingswood. With wins at the 2000 Victorian Country Open and 2009 Southern Open Amateur, the +1 handicapper will certainly take some stopping with Vogel having won five of his seven matches in these series.

Burton, Houston, Vogel and Zappelli were members of the Kingswood team least year and have played solidly this season with Zappelli’s winning match record standing at 5/1 win/loss record.

Colt player, Sean Ong, has won all of his qualification matches to be the only player in the Kingswood team undefeated in this series. Ong recently won the Golf SA Junior Masters Tournament and has featured strongly as a colt play in Victorian main amateur events.

Statistically the Kingswood team is more experienced in Club Pennants and has greater depth to select their final seven for Sunday. Waverley in contrast is a team of youth and packed tightly with young guns like Coupland, Peake, Watt and Drewitt.

It’s often referred that pennant matches are won from the bottom order up.

Moore Park’s fine rune of success in the Sydney Major Pennant series with three wins in the last five years has being built on its bottom order winning matches. Win the lower order matches and the momentum quickly moves as top order players feed off the news that matches have been secured.

You’ll expect the same will unfold this Sunday at Cranbourne Golf Club south of Melbourne.

If there is a difference in Victorian pennants over other pennant series, it’s the passion sport plays in Melbourne, in what is clearly the premier pennant series in the country.

There’s considerable pride within the teams and fierce contests are underpinned by loyal supporters who come out to support their teams in numbers not experienced in the other states.

Waverley has the momentum on its side being current Flag holders and it might just be enough to see the club over the line on Sunday, yet you can be sure that Kingswood will be out to make amends to last year’s final result and go one better.

Either way it promises to be a classic inter-club encounter between two fine teams as they do battle for the honour and prestige of being known as the Victorian Pennant Division 1 winner.

A title few have, yet all clubs want.