Victorian Ben Eccles at just 18, is the winner of the 2013 Men’s NSW Amateur Championships held at Royal Sydney Golf Club.

A recent graduate from the junior ranks where his biggest win was the Srixon International Junior Classic in 2012, Eccles moved to Victoria six years ago from Bolton in the North of England and plays for Victoria Golf Club in Melbourne. 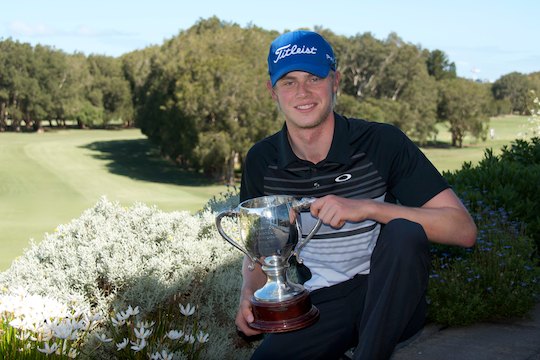 The match play section of the NSW Amateur Championship followed a rain shortened 54 hole stroke event for the NSW Medal, which was won by Thomas Horan of Cheltenham Golf Club.

The top 32 players from the Medal rounds teed off on Sunday for two match play rounds at Royal Sydney to decide the final 8.

The line up in the quarter finals included two of the English National Squad, Garrick Porteous and Neil Raymond, Canadian David Rose and last year’s champion Brett Drewitt of Long Reef Golf Club, who was knocked out by the eventual winner

Moses fought hard throughout the match and was 2 down at the half way mark but he quickly squared the match as they started the final 18.

Eccles later said, “I was pretty relaxed at the half way mark, I stretched and just listened to some music.”

“I knew it was going to be a tough match because I have played against Troy before in the 2011 Victorian Amateur Championship where he got me on the 21st.”

“When Troy got back to square early I just tried to keep a level head and play my own game.”

Moses lost his ball off the tee on 10th to concede the hole. He scrambled an unlikely birdie on 11 to square the hole but a birdie for Eccles on 12 left him 3 up with with six to play.

Eccles was dormy three on the 16th but his drive found the trees and he ultimately conceded the hole.

“Yes I had a bit of nerves there on the 16th tee,” he said. “ I knew what the situation was, I knew what I had to do but could not execute.”

The pressure was building.

“On the 17th I was just thinking, hit the green, and two putt and walk off. I saw his shot and I thought it was good until it fell in the bunker. I thought mine was good but the wind just grabbed it”

Finding himself in the bunker, Eccles was able to pull himself together and get up an down on the par 3 17th to square the hole and win the match.

Eccles is ambitious about his golfing future. The first step being to make a successful application to join the Golf Program conducted by the Victorian Institute of Sports.

“When I get home I have got to fill out the application form and send it off.”

Being the NSW Amateur Champion will certainly strengthen his chances!