Vegas, a Texas Longhorns graduate, became the first player to successfully defend the Canadian title in 10 years after firing a stellar 7-under-par 65 to finish equal with Hoffman at 21-under in regulation. Vegas then secured the title with a birdie on the first hole of sudden-death, the par-5 18th.

“It’s been a special day,” said Vegas. “I knew that I had to shoot a good round today to have a chance to win again. I just came out with an aggressive mentality, just feeling really good about my game.”

“When I started making a few birdies, especially the putt for birdie on 7, I started feeling the same chills that I felt last year when I won, and I just knew that something good could happen if I kept that going.”

Vegas had missed the cut in each of his last five starts and seven of his last nine coming into this championship.

“I’ve had a horrible summer to put it the best way,” Vegas said. “But it’s golf, and you have to keep a positive mentality and always think that you’re going to play your best.” 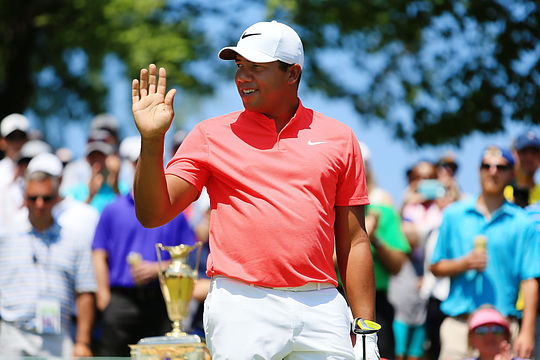 Hoffman was forced to face another close finish having been in the mix for the third time in his last five starts.

“I gave myself a chance,” said Hoffman. “Except I putted horribly today and left everything short. Jonny played great today. All credit to him.”

“I didn’t make that many putts of any significance at all on the back nine unfortunately. … Just didn’t get the putts to the hole, which is probably going to be what I’m probably going to lose a little sleep over.”

England’s Ian Poulter finished a stroke short from making the playoff after carding an impressive closing round 64.

The result is just the latest in a string of impressive finishes for Poulter, including a second at The Players Championship and he hasn’t finished worse than T-45 in eight starts since, including a T14 finish at The Open. These results keeps Poulter’s chances of retaining a PGA Tour card for 2018 even more alive.

Australian teenager Ryan Ruffels fired a closing round that he would rather forget ending his chances of a top-10 finish with a 76.

After beginning the final day three shots off the pace, the 19-year-old Victorian finished in a tie for 32nd at 10-under after dropping eight shots in 14 holes but rallied with an eagle and two birdies in his closing three holes.

Ruffels was the leading Australian, with Cameron Percy at 3-under sharing 70th and Brett Drewitt at 1-over alone in last place.