Simon Viitakangas played arguably the finest opening nine holes of golf in his career to secure a second national selection title with the Golf SA Amateur Classic at Glenelg Golf Club in Adelaide.

Starting the final round four behind overnight leader Jarryd Felton, the 2014 Master of the Amateurs champion came out of the blocks with a 5-under-par opening nine on his way to equalling the course record at the majestic Glenelg layout. 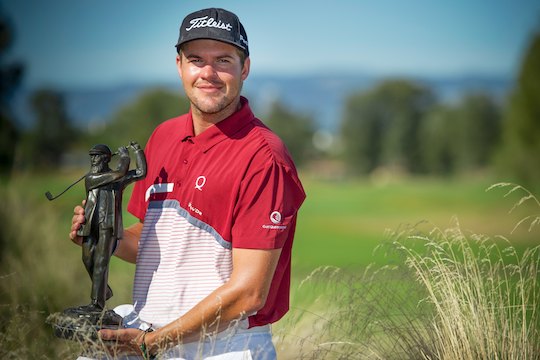 The rest of the field was left in Viitakangas’ wake as he played flawless golf with four birdies and an eagle to equal Aaron Wilkin at 4-under at the turn. Felton had dropped back after four bogeys to make the turn at 4-over.

On the back nine, Viitakangas strung together birdies through 13 and 15, with Wilkin making eagle on the 12th to share the lead and remain in contention for his first national selection title.

When Viitakangas nailed his five foot birdie putt on 15th, it would prove the championship decider although a bogey on the 17th did put his championship momentarily in doubt.

“That was a real grind out there,” said Viitakangas following the trophy ceremony.

“To make bogey on the 17th, well that was still a solid bogey but it was a mistake off the tee to finish in the hazard and I felt that I would be in a playoff with Aaron after putting out on the 18th.”

“You never know and today it fell my way.”

Wilkin also had his share of troubles over the closing holes at Glenelg, which are anything but easy on what is one of Australia’s finest layouts.

Pushing his tee shot on 17 to behind trees forced Wilkin to punch a low approach into the green and he found the green side trap.

It would prove fatal for Wilkin, who has been runner-up here now for two years straight, as he was unable to get up-and-down to save par after the ball was plugged in the bunker.

Looking down the ever imposing par 5 last at Glenelg – which is seldom reached in two – he needed a birdie to force a playoff after Viitkangas made par on the last.

A poor approach left Wilkin with a ten footer which to his credit he almost sunk, but he would again fall agonisingly short with victory going to Viitakangas.

“I played well the across the opening nine and kept it going. This is no easy golf course and I’m just happy with the win and the way I was able to hold it together coming down the closing stages.”

Jordan Zunic finished in 3rd position at 2-under, with Todd Sinnott securing another top-5 finish in a main amateur event at 1-under.

Sinnott has been a model of consistency this season placing in the top-5 in every event since the Mandurah Open.

Jarryd Felton had a day he would rather forget, carding a uncharacteristic closing round of 74 to finish in 6th position, with Anthony Murdaca, Cory Crawford, Scott Ready and Benjamin Stone rounding out the top-10.