Viitakangas wins Master of the Amateurs

Simon Viitakangas secured his biggest amateur title to date with a two stroke victory over Todd Sinnott winning the Australian Master of the Amateurs at Royal Melbourne.

Starting the final round in a share of the lead with Sinnott at 6-under, Viitakangas was able to secure victory with smart play around the majestic West Course at Royal Melbourne.

A birdie on the par 5, 12th, by Viitakangas the turing point for the championship as he pulled away to a four shot leading margin over the field heading into the closing holes.

“I was able to keep the ball on the fairway and that’s what made the difference,” said Viitakangas.

“It was difficult out there. You needed to place the ball in the right attacking positions to have a chance of making par.”

“This certainly is a major win for me and it’s yet to set in, but I know for me it’s huge with all the openings that I will get in the US.” 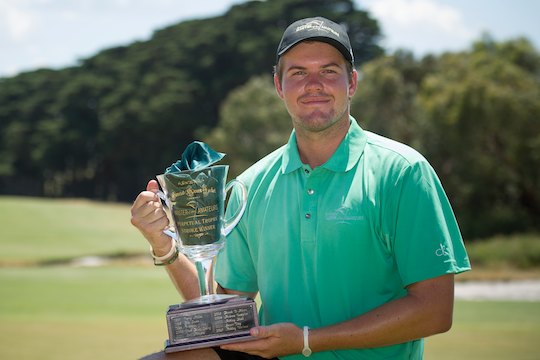 Simon Viitakangas is all smiles after winning the Australian Master of the Amateurs at Royal Melbourne (Photo: Anthony Powter)

“It’s wins like these that you aim for,” said Viitakangas.

“I was striking the ball well all week and was just able to keep the score going.”

Of the 53 elite player field, just four broke par over the four rounds. The West Course at Royal Melbourne again proving a stern test for the world’s best amateurs.

Lucus Herbert was another quality performer this week shooting rounds of 72-75-69-70 to finish in third position at 2-under with American Cameron Wilson at 1-under, the only players in the field other that Sinnott and Viitakangas to break par.

The was another standout tournament played on arguably the best course in Australia. The internationals certainly held their own securing three of the top-10 places with American Max Buckley and England’s Ryan Evans having a superb tournament.

Both will be playing at the Australian Amateur next week in Adelaide and are players to follow.

But for Viitakangas, the spoils of victory are his.

Exemptions aside, Viitakangas has taken out the biggest amateur event and the only Category A world ranking event according to the R&A in this country against a world class field which included four of the world’s top-20 players.

He will certainly head to Adelaide on Monday full of confidence following his win this week in Melbourne and in search of back-to-back wins.