US-based Australian Karl Vilips has continued his superb run at the US Amateur defeating 2016 US Amateur runner-up Brad Dalke, 3&1, in his round of 16 match overnight.

The newly-turned 18-year-old, who is yet another Western Australian success story, is now the last hope for the Australians following the 21st hole defeat of Queensland’s Jack Trent in the round of 32.

With three junior golfers in the US Amateur quarter-finals, Vilips was asked about what makes the next generation of golfers so competitive.

“It’s really just the tournaments we play. We play hard courses. The AJGA invitationals, U.S. Junior, tournaments like that, it really prepares you for stuff like this.”

“We all motivate each other because every week we’re battling it out for the win. We just have to execute shots on top of each other.” 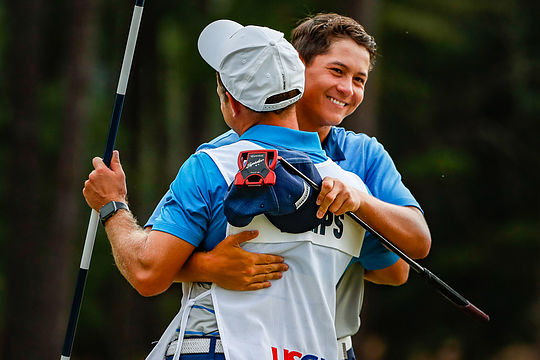 While Vilips grew up in Australia, he has attended school in the US since he was 11-years-old. However, during his formative golfing years Down Under, the Western Australian experienced many of Australia’s best courses and has used that experience to guide him around Pinehurst.

“Growing up a little bit on the Melbourne Sand Belt definitely prepares you for a course like this. Firm greens, fast greens, a lot of falloffs. It reminds me a lot of Royal Melbourne.”

“Where most of the players come from the States, it takes them a while to adjust. But I guess it is an advantage because I already know how these are going to react. I’ve played a bunch here back in the day.”

At just 18, Vilips is already an old hand at the US Amateur with this year being his third attempt at the title and the experience shows in his growing confidence under pressure.

“My first U.S. Ams I really just didn’t think I could make match play, being like 14, 15, and just didn’t have a lot of confidence heading in. But this week coming off the hot tournaments this summer so far, I really felt like I could do it.”

“I put in the extra work this year, and I feel like I’ve changed a lot as far as mentality heading into match play, heading into stroke play.”