Grace Kim and Karl Vilips had to overcome some nervous moments – and some horrible weather before they both scooped individual gold medals at these Games. 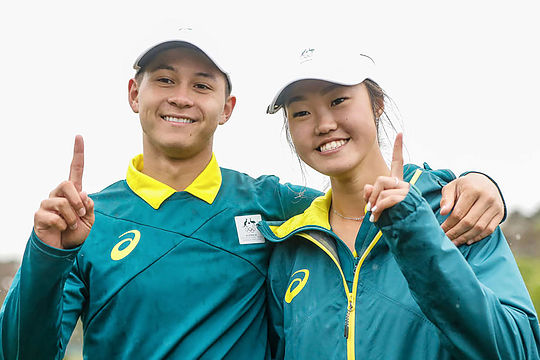 The Aussie clean sweep was looking good when both went into the final day leading their respective singles events.

Sydney’s Kim was tied with Alessia Nobilio with 18 holes left to play but the seasoned youngster fired a final-round one-over-par 71 which was enough to keep the Italian Nobilo at bay and take the gold.

She had a nervous start though, making two bogeys in the first four holes before consolidating with birdies on holes five, 11 and 16 on her way to a three-shot success.

“That was amazing, I’m blown away! It’s so special to win an Olympic medal,” said Kim.

“I’m so happy to be able to win a gold for our team, it’s something so special and I’ll cherish it forever.”

“Down the stretch I was pretty nervous, but I just tried to stay in the present and be calm, it really helped me.”

“I woke up this morning from a dream that I had won the gold, and I was so nervous I couldn’t get back to sleep. I was as nervous as I was on the 18th hole.”

Meanwhile Vilips opened with rounds of 69 and 68 to go into the final day with a one-shot lead at The Hurlingham Club.

Despite some early problems he also rallied on the back nine with four birdies in the final six holes as he charged home to win gold.

“To be able to win the first gold medals for Australia is incredible, I can’t describe it,” Vilips said.

“But then everything started going my way.”

“It’s so cool to be up on that dais, to be on the highest level, I’ve only ever seen this on TV and to be able to do it myself, I know it’s something not many people get to experience.”

The pair were gearing up for the 72-hole teams’ event as this edition of Golf Grinder was launched.