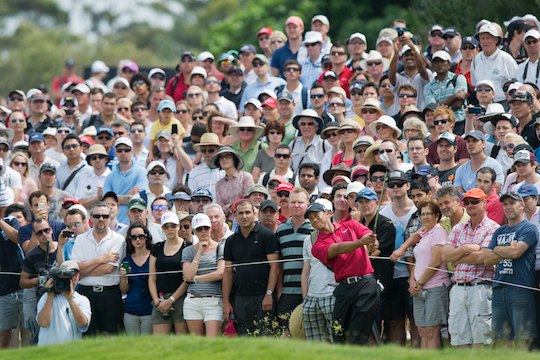 The victory was the largest winning margin on tour since Rory McIlroy won the 2011 US Open by eight strokes.

Woods’ last PGA Tour win was the 2009 BMW Championship, although he won the JBWere Masters in Melbourne the same year before his world was turned upside down with scandal and injury.

“It does feel good, it feels really good,” Woods said immediately after his win.

“The conditions were tough. These pins — Arnie took it to us today.”

Woods’ win at Bay Hill, his 98th career title, is significant in many ways and it differentiates from the 14 Majors and the 71 PGA Tour wins already to his credit.

At 36 and plagued with injuries as well as on and off-course issues, many golf fans were wondering if he’d ever win again.

Now, with the Masters coming up in two weeks, his seventh victory at Bay Hill sets him up as one of the tournament favourites as Woods pursues his fifth green jacket.

“But it feels really good. It’s down to a lot of hard work but it was great to have so much support out there.”

“I’m excited about the Masters. It’s always fun to play there and I’m looking forward to going to Augusta with the momentum I’ve built here.”

Woods is considered the greatest closer in the game. His winning record with a 54-hole lead prior to this week was 48 from 52.

Today’s 2-under-par 70 round was vintage Woods.

England’s Ian Poulter finished third, his best finish of the year, but Ernie Els shot a 75 to miss out on Augusta.

Els needed to finish outright third or better to qualify for the Masters by climbing back into the world’s top 50.