The windmill finish that had golfers all around the world checking him out on You Tube has paid dividends, big time, with Choi winning a Japan Tour golf event. 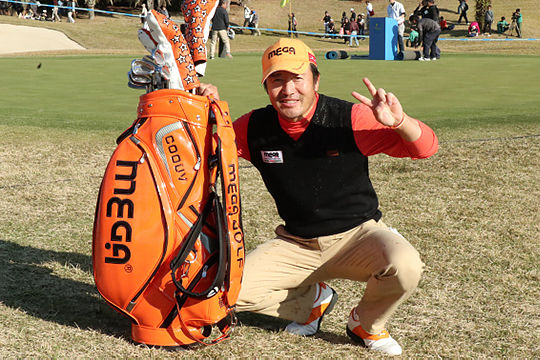 Choi’s unusual swing sees his right foot occasionally leave the ground as he powers through the ball and almost chases after it.

But the bottom line is, it works.

A video of Choi’s swing received an incredible 500,000 views from golf fans around the world, amazed at his talent.

But he was making his mark and now Choi has left them all gasping after winning for the second time on one of the world’s toughest golf tours.

Choi won the Casio World Open, winning by a single shot from Australian Brendan Jones, firing a final-round 67 that included one of his trademark ‘specials’ on the 72nd and final hole at the Kochi Kuroshio Country Club.

After the win, Choi took an amazing victory picture with the trophy that showcased his accentuated follow-through – ever-smiling and with his leg in the air as he clutched the winner’s trophy.

The South Korean became an overnight sensation when up-and-coming pro Tee-K Kelly shared Choi’s swing while he was watching the Asian Tour one night in June.

Certainly he has won many more fans with his unorthodox swing, with some naming him their new favourite golfer.

And success in Japan assures him that the legend will continue to grow.