Queensland’s Simon Viitakangas maintains the lead after the second round of the Australian Master of the Amateurs at The Royal Melbourne Golf Club.

Viitakangas started the day with a share of the lead at 2-under, along with James Gibellini and Frazer Droop.

An impressive second round 2-under, 70, see Viitakangas at 4-under for the tournament with a stroke lead over American Cameron Wilson. The West Course at Royal Melbourne again proved the perfect test, with challenging pin locations pushing many player’s nerves.

Following two rounds in this event, just eight players are under par.

Cory Crawford is in third position at 2-under, with five players in a tie for fourth at 1-under, including American Max Buckley, James Gibellini, New Zealand’s Tyler Hodge and Aussies Daniel Hoeve and Todd Sinnott. 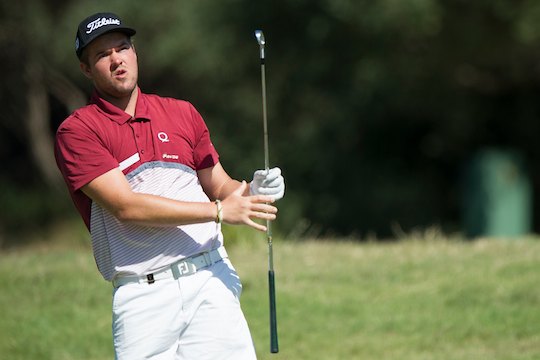 With no cut, the Australian Master of the Amateurs remains an open affair with fifteen players including American Brandon Hagy and Aussies Jordan Zunic, Taylor McDonald, Anthony Murdaca and Frazer Droop, within six shots of the leader.

They all have a chance to make a move and the tournament remains delicately in the balance with the short holes on Royal Melbourne’s West Course proving a challenge for this elite field.

The Master of the Amateurs has already proved to be a prominent stepping stone in the golfing careers of Australians Jason Day and Brendan Jones and the US PGA Tour’s young gun, Rickie Fowler and there’s no reason not to believe the next wave of PGA Tour players are competing this week in Melbourne.

With exemptions into the British Amateur, the Brabazon Trophy, Porter Cup, Players Amateur, Dogwood Invitational and the Canadian Men’s Amateur championships, there is a lot at stake for the field.