Overnight leader Simon Viitakangas and Todd Sinnott will take the lead into the final round of the Australian Master of the Amateurs at The Royal Melbourne Golf Club in Victoria.

Viitakangas started the day at 4-under, and a shot ahead of American Cameron Wilson and fired a third round of 2-under-par, 70.

Sinnott started the day at 1-under-par and went on to card a 5-under-par 67, moving the Victorian up the leaderboard to sit at 6-under-par with Viitakangas.

Sinnott’s impressive 5-under-par third round was one more than the day’s low round with that honour going to Aaron Wilkin, who fired a third round 66 to move into a tie for 7th position.

Despite relatively calm conditions, The West Course continues to challenge this elite fifty-three amateur player field. After the third round just twelve players are under par.

Placement from the tee and clutch putting, as opposed to length from the tee, are proving the keys to low scoring around Royal Melbourne’s West Course. Members are not surprised that the 135 metre par 3, 6th, the shortest hole on the course, continues to prove problematic for players. 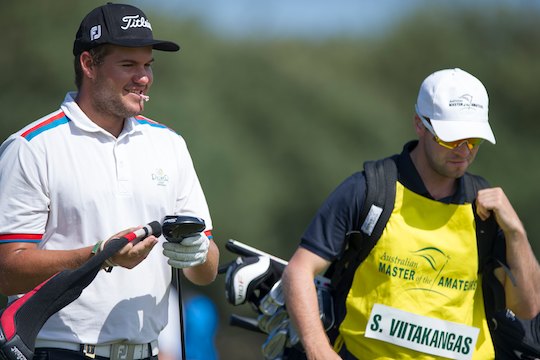 Simon Viitakangas is all smiles after taking a share of the lead heading into the final round of the Australian Master of the Amateurs at Royal Melbourne (Photo: Anthony Powter)

Throughout the last three rounds this “sleeper” has seen players recording as high as eight, with many three putting the super-quick green.

American Cameron Wilson is in third position at 4-under after rounds of 72-69-71, with Australian Cory Crawford in 4th position at 3-under.

Another American, Max Buckley, is in a tie for 5th with New Zealander Tyler Hodge at 2-under.

With greens running above 11, a player’s capacity to handle pressure-putting will prove invaluable in tomorrow’s final round.

Sinnott is due for a win, with his last top amateur victory in 2012 at the Portsea Open Amatuer. Viitakangas won the 2012 Port Phillip Amateur and was runner-up in the 2012 Gary Player Classic.

As to how they will handle final day pressure is yet to be seen.

The field competing this week is easily the best that is assembled in Australia, justifying R&A’s ranking of the Australian Master of the Amateurs as Australia’s only Category A event.

Challenges against Sinnott and Viitakangas are sure to come from the pack. Amercan players have in the past featured strongly, with Mark Anderson defeating Rickie Fowler in a play-off in 2009.

Two of the last five titles have been determined by a play-off and given the nature of this events this week, another seems likely tomorrow to determine who will be wearing the Green Jacket and crowned the Australian Master of the Amateurs Champion.