Frenchman Romain Langasque is proudly heading to next month’s U.S. Open after brilliantly collecting his first Tour victory in muscling his way to a two shot success at the ISPS Handa Open Wales Open at Celtic Manor.

Langasque, 25 and a former British Amateur champion (2015), came from five shots back heading into the last day to win with a stunning bogey-free 65 for an eight-under par total.

The Cadris-born golfer is the second French winner on Tour this season after Joel Statler won a month ago in Austria and the third since Victor Perez captured last October’s Alfred Dunhill Links Championship at St. Andrews.

As well, Langasque is the second French golfer to win the stunning Wales Open trophy after Gregory Bourdy became the first in 2013.

“Everything in golf can go so quick. I’m really happy, this is where we all want to be. Now I’ll have some good opportunities. I need to focus again, but it’s where I’m looking forward to go. Playing my first U.S. Open this year, the good thing is with no public there’s less pressure on it being my first one. I’m really proud of myself.” 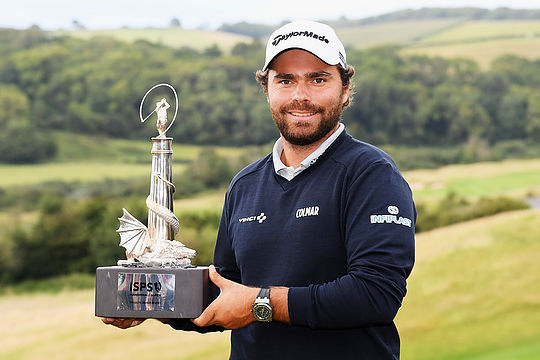 “I had a good session with my coach at the start of the week, so I was playing really good coming into the event given all the work we had done on my game,” he said.

Finland’s Sami Valimaki, and the winner earlier this year at the Oman Open, shot a 69 to grab second place at six-under but only after Swede Sebastian Soderberg, who shared the third day lead with Syme, took a triple-bogey ‘8’ at the last in a 74 to drop to a three-way share of fifth on four-under.

Jason Scrivener fired weekend rounds of 69 and 68 to secure 8th place on 3-under while Jake McLeod recovered with a Sunday 69 to finish in a share of 44th.

The final tournament of the ‘UK Swing’ takes place this Thursday at The Belfry for the ISPS HANDA UK Championship.