There’s something about team events in golf that gets players going.

Considering golf traditionally is an individual pursuit, the opportunity to be part of a combined effort must certainly appeal. 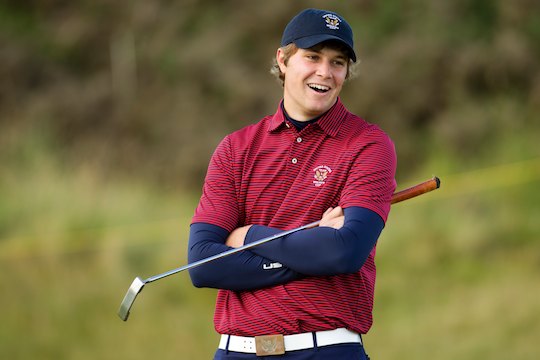 Add in national pride and the desire to go head-to-head against the best players in the world and you can appreciate why the appeal gets even better.

This weekend the Walker Cup gets underway at Royal Aberbeen in Scotland where Britain and Ireland’s amateurs go up against an all American line-up.

There was a period were golf fans didn’t pay much attention to the Walker Cup, the biennial international competition between the top amateurs from the United States and Great Britain & Ireland that’s based on the same format as the Ryder Cup.

American dominance had something to do with that.

The inaugural Walker Cup Match took place in 1922 at National Golf Links of America in Southampton. The US won that one and the next eight as well. In fact of the first 31 competitions, America won 28, lost two and tied one.

Then in 1989 at Peachtree Golf Club in Atlanta, GB&I scored a 12 ½ to 11 ½ victory over the USA. It as the first time GB&I won on American soil and it would mark a turning point in the competition.

Since 1989 GB&I has won five of the last 11 encounters, including three in a row from 1999-2003. Recently, the USA switched the tables, winning three in succession and on paper USA are set towards making it four come Sunday.

The Americans have five of the leading six world ranked amateurs in their ten man squad.

Players in the GB&I team don’t have the same world ranking punch as the Americans, yet you would be foolish to discount the home side’s changes of claiming the Cup.

GB&I is spearheaded by Tom Lewis, the 20-year-old from Welwyn Garden City whose brilliant 65 at Sandwich in July not only gave him a share of the Open Championship lead, but was the lowest round ever by an amateur in the event.

Lewis this week announced that he’ll be turning professional following this Walker Cup and has attracted the media scrum as a result, which probably is not a bad thing given the majority of the GB&I team prefers to operate under the radar.

Jack Senior is not adversed to playing in the thick of the action and the Englishman is certainly a world class player.

The winner of the NSW Amateur championship, the 2011 Lytham Trophy and a semi-finalist at this year’s US Amateur, Senior has shown that he can compete and win agains the world’s best. The Americans are sure to be careful who they match up with Senior.

Andy Sullivan, who’s a tenacious match play exponent, is another who’ll give the Americans a run for their money.

This Australian summer Sullivan displayed stellar golf, completing his tour down under with 5 top-10 finishes in the six events that he entered.

On at least three occasions, like Tom Lewis, Sullivan was in contention on the final day, including the Lake Macquarie Amateur, the NSW Amateur and at the Master of the Amateurs.

The Englishman is a classy player and will not be put off with the hype currently attached to Lewis and to the US team and what’s being remarked as the low chances they have of defeating the Americans.

Stiggy Hodgson, the only member of the 2009 GB&I Walker Cup team, also has the experience and game to account for the more favoured Americans.

During the weekend there will be the traditional stunning encounters as the US team will be out to make it four in a row.

I still recall the victory parade Rickie Fowler did wrapped in the stars and stripes flag back in 2009 after the Americans disposed the GB&I side 16 ½ to 9 ½ at Merion Golf Club. Since then the Walker Cup has taken a special place in my golfing calendar as a must follow event.

Rickie displayed the passion, the honour and the joy of competing in what’s arguably, aside from the World Amateur Team championship, the best amateur teams event in the world.

We’ll witness the same passion and intrigue come Sunday and as to the outcome, we probably don’t mind which team wins as long as the golf is good.