Walker denies Day by one at PGA Championship

American Jimmy Walker has held off world number one Jason Day to take out the PGA Championship by one stroke at Baltusrol Golf Club in New Jersey.

Walker, a 37-year-old Texan who had missed the cut at his last two majors and never finished higher than a tie for seventh at any major, held his nerve when it counted after Day applied the pressure with an 18th-hole eagle, which forced Walker to make a nervy 3-foot par putt on his final hole to claim victory.

Earlier, Walker began with nine straight pars and the turning point came on the 10th when he chipped in from a bunker. That handed Walker a two-shot lead and although Day, who defiantly bounced back from two early bogeys, birdied the 11th, Walker soon restored the margin on the same hole, draining a 12 metre putt.

Walker then parred the next five holes and when he birdied the par-five 17th and Day eagled the par-five 18th, all Walker needed was a par on the 18th for the championship. 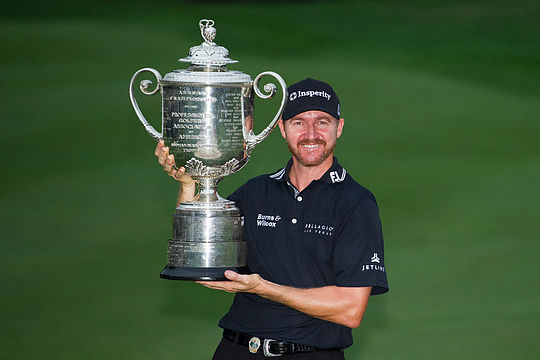 “I was standing out there on the fairway and just said to my caddie, ‘let’s go for it’. I didn’t say this, but I figured, 19 times out of 20, you’re going to make a five going for the green from right there,” said Walker.

Walker’s final-round 67, which made him 14 under par for the tournament, was one ahead of Day who also carded a final round 67, and six clear of Stenson who finished in 3rd position after a late double-bogey.

Walker is a classic tour journeyman, having first played on the PGA Tour in 2005, he frequently failed to retain his card and had to re-qualify for the main tour three times.

Yet he was put to the test today and those years of setbacks and plying your trade on the toughest tour in the world certainly helped Walker get across the line.

“It feels sweet. It’s amazing. It’s just surreal, it really is. I’m having a hard time putting words to it right now.”

“It’s an incredible finish, what Jason did, eagling the last hole, forcing me to make a five. It was huge. It was tough.”

Day gave it all he had and numerous chances slipped by to defend his title. Golf after all is a game of margins and Day went down today by the narrowest margin of them all.

“Yeah, a little disappointed,” Day said about falling short. “But you know what, at the end of the day, I came in here with not the greatest preparation. I’m very, very happy with how I played all week.”

With his finish today, Day also added another record to his resume, albeit one he mightn’t want, he has now finished runner-up at all four major championships.

Walker’s win means this year is the first since 2011 that has seen four first-time major winners in a season. Walker is also the first wire-to-wire winner of the PGA Championship since Phil Mickelson, who won at Baltusrol in 2005.

Olympian Scott Hend (T42), Aaron Baddeley (T49), Marc Leishman (T60), Marcus Fraser (T73) and Matt Jones (T79) rounded out the large group of Aussies to make it through to the weekend at Baltusrol.