Wild weather had forced the tournament organisers to modify the event which saw the day one leaders of Lonard and Wall who finished at 4-under forced into the playoff. 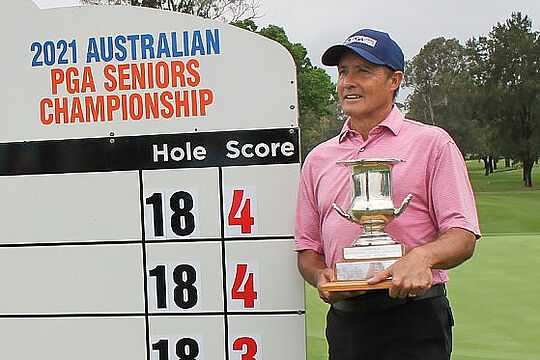 The par 3, 10th hole at Richmond then became the battle ground for the title with Wall nailing a birdie putt from 12 metres on the fifth playoff hole to claim his biggest title since turning professional in 2015 after winning the Legends Tour Q-School.

At the time Wall had turned 50 and turned up to the qualifying school with a dream to give professional golf a go.

At Sandhurst Golf Club in Melbourne, Wall shot rounds of 71- 71- 73, came first and received one of just three tour cards on offer. The rest is history.

“Probably something that I didn’t dream of when I started out playing professional golf but given that it is around this golf course which suits me down to the ground I thought I could have had an opportunity,” said Wall.

“Just never knew what was going to happen and then got told at about 11 o’clock that I had to get here for a playoff with one of Australia’s best ball-strikers in Peter Lonard. Very, very happy.”

It was Wall’s third victory on the Legends Tour, yet arguably his best so far and the victory secures him a five-year exemption. As for Lonard is was his second consecutive runner-up finish at the event.

The Legends Tour moves to the Gold Coast for the Gold Coast Senior PGA Championship at Lakelands Golf Club which unfortunately due to boarder restrictions will not see many players from the southern states participating, yet will still boast a strong field with Peter Senior, Rodger Davis, Terry Price and Andre Stolz all entered.