England’s Anthony Wall has taken out the highly favoured Alex Noren to win the final of the Paul Lawrie Match Play at Archerfield Links in Scotland, recording just his second European Tour title 16 years and 204 days after his maiden victory.

The Englishman’s wait between titles is the longest in European Tour history, while the 431 events since his first triumph in South Africa surpasses the previous high of 276 set by the late Christy O’Connor Jnr. 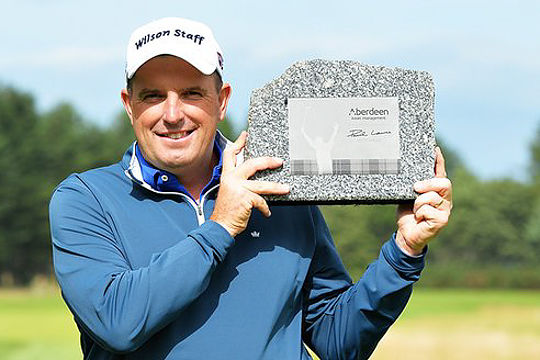 “It’s funny, the other win in 2000 felt like yesterday,” Wall said, “It’s amazing because it’s such a hard job to beat everyone because everyone is so good. It just feels amazing – I cannot tell you how happy I am.”

The in-form Noren, who won the Scottish Open title the week prior to the Open Championship, had scorched the front nine over the first five rounds of the tournament and made another flying start in the final with birdies at the first two holes.

However, Wall bounced back with birdies at the third and sixth holes to square the contest before going one-up with a birdie at the 11th.

Wall maintained his narrow lead when both players birdied the short 16th before Noren lipped out a chance to tie the match at the 17th.

The Swede had one last chance to send the match into extra holes at the 18th but the title went to Wall after Noren missed his birdie chance from 15 feet.

“I did wonder whether it would ever come again.” continued Wall, “I’m just so pleased for my parents, they put in so much when I was young. I’ve got two children that just want to see their Dad win, I’m speechless, it’s phenomenal.”

Richard Green was the best of the Australians in the limited field event, winning two matches before bowing at the hands of the eventual champion on Friday. Brett Rumford succumbed at the first hurdle when defeated by England’s Chris Wood.

The European Tour resumes after next week’s Olympic tournament at the Czech Masters from August 18-21.