The Austrian hills are alive with the sound of bagpipes after Marc Warren brilliantly celebrated a European Tour return to golf in ending a six-year winless drought to capture the Austrian Open.

Warren, 39 produced a roller-coaster opening dozen holes on the final day before birdieing two of his closing four in a score of 70 to win by a shot at 14-under par on the Diamond Resort course at Atzenbrugg, near Vienna. 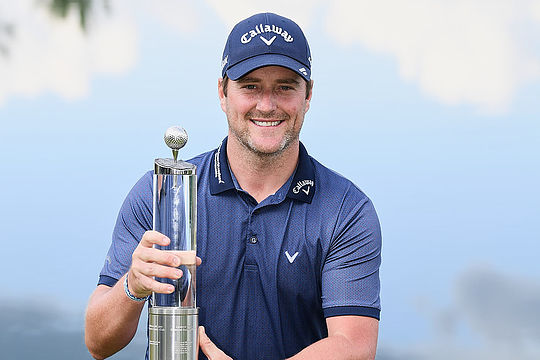 Germany’s Marcel Schneider (69) was second at 13-under par with the Scottish duo of Craig Howie (66) and Connor Syme (72) sharing fourth place at 12-under par.

Warren’s victory is the Scot’s first win in six years since capturing a third Tour victory at the 2014 Made In Denmark.

And the proud Glaswegian has won in carrying his own clubs for four rounds after full-time caddy, Ken Herring was ruled out after failing to receive the results of a compulsory COVID-19 test.

What’s In The Bag: Marc Warren

Warren said: “It’s been a long wait as it was 2014 the last time I won, and what’s happened on the golf course in the years since then, I’ve played very poorly.”

“The (COVID-19) break has been unfortunate for everyone but it came at a good time for me, allowing me to spend some time at home and trying to get my game ready to play golf.”

“The last few weeks I’ve been able to get some good work done and be ready to play golf, so I came here to Austria pretty refreshed.”

“Also, having to carry my bag this week probably helped tone it down a little, just going out and playing and seeing what happens so the result couldn’t have been any better.”

“Hopefully this is the one and only time, no matter what I say, I do enjoy the caddie’s company and especially on days like yesterday.”

“Last night I had a few nice texts from some of the caddies who are good friends, I didn’t say it but I was thinking I could have done with one of them yesterday, it was brutal in the weather we had.”

“At times like that you appreciate what a great job they do so I’m looking forward to getting a caddie on the bag again.”

It is Warren’s biggest prize purse since a £92,000 pay out in sharing 10th in the 2017 Italian Open but it’s not the money but again being a winner on Tour that’s more important to the now 18-year pro veteran.

Given it was a joint European/Challenge Tour event, Warren earns just a one-year exemption to the end of 2021.

As well, Warren’s victory will see the Scot jump a remarkable 933 places on the World Rankings from the current No. 1,258th ranked golfer to the new No. 325th.

Warren said: “In terms of my career, this win is massive. It means going from not having main Tour status at the start of this week to now back into a winner’s category so I can plan the remainder of the year a little bit better.”

Warren was expected to join five of the other six Scots who competed in the Austrian Open in teeing-up Thursday in the Euram Bank Open at Ramsau but he’s chosen now to return home to Scotland and be with his family.

The lone Australian in the field was Deyen Lawson, who finished in equal 31st place following a last-minute dash to Europe from Australia.