Western Australia’s Abbie Teasdale has been crowned the English Amateur Champion following a narrow victory over England’s Davina Xanh at Lindrick Golf Club in the north of England.

Xanh took a 1up lead with a birdie at the second hole and moved to 2up at by the 8th hole before heading into the clubhouse just one hole in front when Teasdale managed to secure an all-important birdie at the par-3 18th hole.

Things didn’t look good for Teasdale early on in the second 18 holes. Xanh came out of the gates swinging and had quickly moved to 3up after Teasdale bogeyed the 19th and wiped the 20th.

However, the 19-year-old, who plays out of Royal Fremantle, held strong and managed to drop two more birdies before the turn to get the match back to all-square and set up a tense back nine in the process.

When Xanh bogeyed the 10th, Teasdale took control and aside from a dropped shot at the 33rd hole, the Australian managed to maintain her one shot lead all the way until the end. 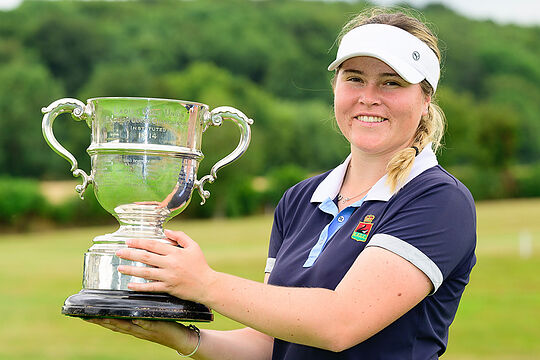 “It feels good, it just hasn’t sunk in yet,” said Teasdale, who also topped the 36-hole stroke play section of the event with rounds of 69 and 75.

“I just tried to play as best as I could. It wasn’t really going my way but I knew that there was still going to be another 18 to go. I didn’t start very well on the second 18 but then I managed to make about five or six birdies to get it back so it turned out good in the end.”

It was the second major win of the year for Teasdale after winning the prestigious Riversdale Cup in Melbourne earlier this year.