Stephen Dartnall has broken through to win his maiden PGA Tour of Australasia title at the TX Civil and Logistics WA PGA Championship.

Starting the day five shots off the lead, Dartnall fired an impressive 6-under 66 to win the title with a tournament total 16-under 272. 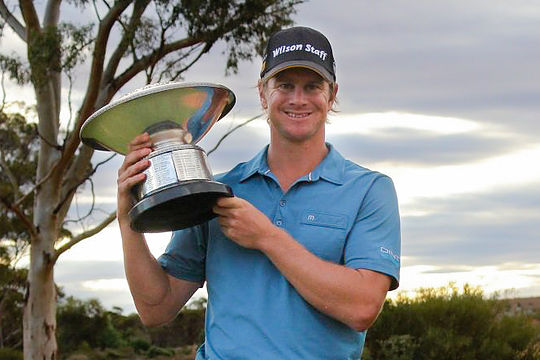 It was a hard earned win for Dartnall with plenty of challengers contending throughout the final round, but a birdie on the final hole ensured he won by two shots over Aaron Pike and Lindsay Wilson.

“I didn’t really know where I was on the leaderboard until the last hole,” said Dartnall.

“I hit a really good drive and then a 3 iron into the last hole to about 10 feet. I just missed the eagle putt but I am pretty proud to have finished off like this.”

32-year-old Dartnall was ecstatic to finally notch up his first Tour victory after coming close many times since turning Professional in 2008.

“I am stoked; I played really well with not to many mistakes. It got a bit windy towards the end but it’s great to finally have pulled one off,” added Dartnall.

“I have had a lot of good chances in the past but never really capitalised. It’s good to finally get the monkey off my back and go into future tournaments knowing that I have won before.”

Dartnall becomes the second West Australian in as many years to win the TX Civil and Logistics WA PGA Championship after Brett Rumford won last year.

Tour rookie Lindsay Wilson fired a 2-under 70 in the final round to finish runner-up with third round leader Aaron Pike who had an even-par day.

Finishing outright 4th on 12-under the card was Callan O’Reilly who was on fire early in the day recording 29 on the front-9 before ending his day with a 2-under 70.

A shot further back and rounding out the top-5 was Victorian, Deyen Lawson.

For his win Dartnall picks up AU$18,000 and moves to 15th on the PGA Tour of Australasia Order of Merit.