Tom Watson answered the prayers of Golf Australia, the Seven Network and the Australian golfing public with a rousing 4 under par 68 in the calmer morning conditions in Friday’s second round of the Emirates Australian Open.

Visits to unchartered parts of the Lakes course enroute to a 6-over 78 in round one left the eight-time major champion in danger of missing the cut but his fighting qualities and competitive nature spurred him on to the equal best round of he day, ironically matched by fellow senior, Peter Senior. 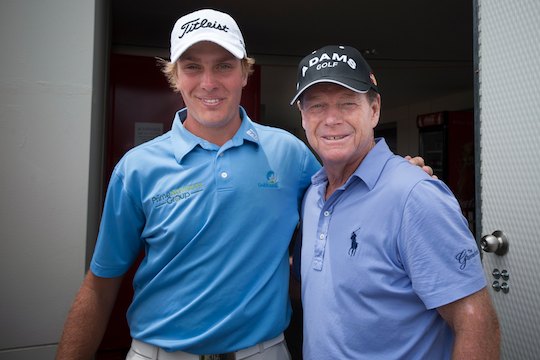 Jake Higginbottom and playing partner, Tom Watson, after the second round of the Australian Open at The Lakes (Photo: Anthony Powter)

Watson admitted to keeping close tabs on the likely cut mark, earmarking a birdie over the final two holes of his round as critical to making the weekend.

“I knew that one, two or three over, something like that, would be the cut but two was kinda the number I was shooting at. I would have liked to have had one.”

“Of course, I made it play a lot tougher when I hit it in the water and the ice plant.”

Asked if making the cut was a matter of pride for him today, Watson was quick to respond with an unequivocal “Yes it was. I hate missing cuts, it means you’ve failed.”

“I played sloppy golf yesterday and made unforced errors. I made a slight adjustment with my swing today, which helped me hit the ball a bit more solidly and I made some putts.”

“These greens are really complicated, they’re hard to play. If you miss a few greens here, you do that two or three times, you make bogies. You make bogies, you don’t win the golf tournament.”

Watson feels that there are opportunities on the golf course to make up ground, especially if the winds blow harder in the afternoon as they have over the first two days.

“Maybe I can get out early and have a real good round tomorrow and run up the leaderboard some.”

He’ll have some familiar company in the shape of defending champion Greg Chalmers who played the first two rounds with him, along with youngster Jake Higginbottom, who also scraped into the weekend on 3 over.

On completing his round, Watson had obliged 14-year-old Chinese golfer Tianlang Guan with a photo and an autograph and then stunned the youngster with an offer to play a practice round with him at next year’s Masters Tournament – at 1pm on Tuesday to be precise, in Watson’s 40th appearance at Augusta National.

He also had some kind words for Higginbottom.

“He’s a long, strong young kid. There are a lot of them out there but he has good nature about him and he’s got some talent there to develop. His game won’t remain the same, it will improve.”

Watson enjoys the opportunities to help youngsters on their way.

“They remind me of me,” he smiled, recalling his early days looking up to experienced players and the advice they offered him.

Some of the youngsters in the field this week probably wish they could play as well as the 63-year-old is right now.