Double Major winning Bubba Watson ended his season on a high in capturing the Hero World Challenge at Albany in the Bahamas.

Watson picked up two early birdies and from there was never challenged, winning by three shots with a 6-under 66 for a three-shot victory over fellow American Patrick Reed. 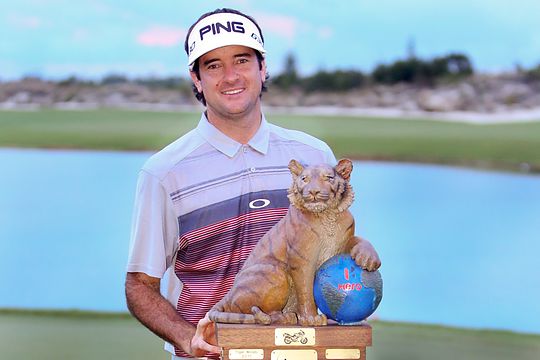 Watson didn’t make a bogey all weekend until the final hole, and by then it didn’t matter except in the record books. He finished at 25-under 263, missing by one shot the tournament record set last year by Jordan Spieth at Isleworth.

It was the second victory this year for Watson, who will finish the year at No. 4 in the world.

“I guess I’ve got to thank Jason Day for backing out. I have to thank the U.S. government and passport office for getting Dakota a passport so we could be here,” Watson said.

And local Albany resident Justin Rose also ending his year with a new course record of 10-under par 62 for a share of 13th place at 13-under par.

After beginning the day in outright second, Adam Scott finished in equal 10th at 16-under the card following a final round 69.