Watson built the platform for victory with three key putts early on the back nine, before holing a bunker shot on the par-3 14th. He then never gave anyone a chance closing in formidable style firing a 2-under 69 for a two-shot victory over Tony Finau and Kevin Na.

“Nobody thought that Bubba Watson from Bagdad, Florida, would ever get to 10 wins. Let’s be honest,” said Watson after the win. “Without lessons, head case, hooking the ball, slicing the ball, can’t putt, you know?”

Watson, who finished at 12-under for the tournament moved from No. 117 to No. 40 in the world, making him eligible for the World Golf Championship in Mexico in two weeks. It’s a marked turnaround in form following a few years in the darkness. 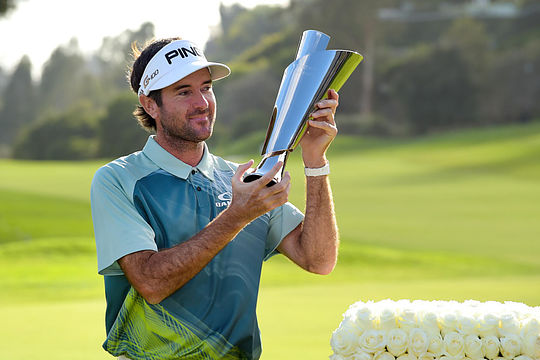 Watson turned on the water works and let the emotions flow on Sunday as he unloaded about his life struggles, both on and off the course.

“From that downfall of the letdown of not making the (2016 Ryder Cup) team and then to get sick, to lose all this weight, just family drama of my son starting school, my wife having surgery, just all these things added in, never knowing if you’re going to make it again,” said Watson.

“You don’t want it to be because I’m an athlete, I want it to keep going. The emotion was just that, like ‘wow, I still have a chance in this game’. I was close (to retiring). My wife was not close. My wife basically told me to quit whining and play golf. The last year and a half, almost two years give or take, it’s been a struggle because I want to be at the top.”

Watson now has the opportunity to become the ninth man to win three or more Masters titles at Augusta in April. Sunday’s win was timely and the talk will be do we have a ‘Bubba of old’ or a ‘new Bubba’ back. Either way Watson does bring an interesting perspective to the game.

Scott Stallings and Patrick Cantlay finished in a tie for 4th at 9-under with Adam Hadwin, Phil Mickelson and Aussie Cameron Smith in a share for 6th.

Smith fired rounds of 72-68-65-71 to close at 8-under to record his third top-10 PGA Tour finish this season with the Queenslander having made the cut in each of his seven starts and pocketing to date an impressive US$1.4 million for the season.