(TPC River Highlands, CT:) Double Masters winning Bubba Watson has not only captured a third Travelers Championship but he is the first three-time winner this year on the PGA Tour.

Watson posted a blistering last day 63, that included a brilliant chip-in for birdie at the 10th hole.

Earlier this year Watson captured the Genesis Open and a few weeks later strolled to a 7&6 success in the final of the WGC – Dell Match-Play Championship.

“It’s been an amazing ride. My whole career, but this year has been outstanding,” said Watson.

“After last year, who knows what to expect. It’s amazing what some good energy and some healthy energy will do. Coming into the final round, again, I was just trying to play for position. I think I started the day 8th maybe.” 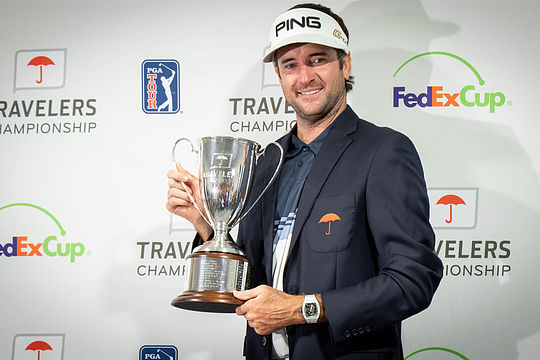 The biggest disappointment today was the effort of England’s Paul Casey who went into the final round leading by four shots and quickly moved to five ahead after a first hole birdie but it would prove the highwater mark in his attempt to win for a second time this season.

Watson, who first won the event in 2010, had denied Casey in winning a play-off for the 2015 title but it was Casey who virtually handed the Florida golfer his third victory this year when the Englishman stumbled over his closing handful of holes.

Casey found the water at 13 but saved par before a second bogey of his round at 16 and then another bogey when he found the water off the tee right at 17 to fall three shots behind Watson en route to a 72.

“There was a lot of fight in there. I fought my golf swing all day. So you can see coming down the last couple of holes, hitting the pull 8-iron on 16, and the flair right on 17 just about summed it up. Yeah, incredibly frustrating,” said Casey.

“I’ll go away, analyze this, look at it and see what we can do better in the future.”

Watson posted a 63 for a 17-under par and with Casey sharing second place with three others including former Open champ, Stewart Cink (62).

Rory McIlroy has this week off before returning home to host next fortnight’s Irish Open at Ballyliffin ahead of teeing-up in the 147th Open at Carnoustie and, where in 2007, the then 18-year old won the ‘Low Amateur’ award.

McIlroy ended his Travelers Championship campaign just outside the top-10 with rounds of 64, 69, 69 and a no-frills closing 67 for an 11-under par tally.

“I’ve still got some work to do. I played well on Thursday, but then I sort of just reverted back to a couple of bad habits that I’ve been in and struggled the last three days,” he said.

“I’m proud of myself. I hung in there. I didn’t have my best stuff this week.”

“I’ve got the Irish Open the week after next, and then play a little bit of links golf and get ready for The Open.”

Jason Day was the best of the Aussies but endured a rollercoaster round matching six birdies with five bogeys to fall into equal 12th at 11-under and six strokes behind Watson.

Matt Jones also struggled with his game on the final day firing six birdies and giving them all back with six bogeys to slide into a tie for 19th.