Brady Watt experienced a round that he would rather forget after he signed for 76 to be equal leader at 4-under-par with Brett Drewitt after the third round of the Riversdale Cup in Melbourne.

Having started the round with a three shot lead, Watt found the northerly winds that lashed the Riversdale layout a challenge in the 35 degree heat. 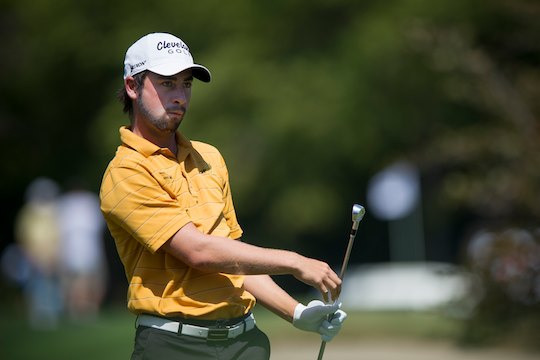 Brady Watt follows his approach into the the opening hole of the third round of the Riversdale Cup (Credit: Anthony Powter)

“I could have blown it out there,” said the world number two.

“An 80 was on the cards at one stage, but I came home strongly and finished the last with a birdie to give me some momentum moving into the final round. This round is erased from my memory and tomorrow is a fresh start.”

Whilst Watt was having his share of struggles, Drewitt was motoring along with the day’s low round of 3-under-par, 69 to again move into contention for another amateur title.

Drewitt was all class on a day where the majority of the field struggled.

“Two eagles really helped my round on a day that was exceptionally difficult,” said Drewitt. 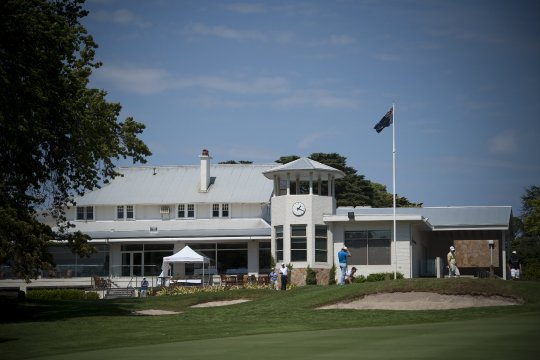 The view over the second green at Riversdale during the third round of the Riversdale Cup (Photo: Anthony Powter)

“This is a bonus to be in the share of the lead. You know I toughed it out with my opening round 73 and to tough it out today and shoot a 69 is especially rewarding.”

Drewitt’s consistency is something that he’s become know for and will serve him well when he take the next progression to the professional ranks.

“I was expecting to be four or five behind the leaders,” said Drewitt.

With tight pins and greens that firmed as the day grew longer, Drewitt played exquisite golf.

“It was bought out there,” said Drewitt.

“But its great to put myself into contention again and hopefully I can get another win.”

Drewitt’s last win was at the 2012 NSW Amateur championship, although he finished runner-up at the Lake Macquarie Amateur and a fortnight ago secured a top-25 finish on the Australasian Tour at the Victorian Open.

Rory Bourke fired a third round fired an even par 72 to move into a share of third position at 2-under-par, along with Todd Sinnott who fired a 73, Geoff Drakeford with a 74 and James Gibellini who carded a 74.

With eleven players within three strokes of the leaders, the final round is sure to produce a tight finish.

Today’s 76 was Watt’s first over-par round in an amateur event for some time, yet he was adamant this will be a one-off.

“This was just a round I want to forget,” says Watt.

“I’m still in there somehow even after today’s round. I hung in there when I easily could have blown it.”

“Tomorrow is a another day!”