Brady Watt has claimed his maiden professional win at the Sandbelt Invitational, which made its debut just days before Christmas.

Watt, who as an amateur won the 2011 Lake Macquarie Amateur, 2012 Riversdale Cup and took medallist honours at the 2013 Australian Amateur, crushed the mixed-gender field, finishing six strokes ahead of Queensland’s Jed Morgan on 10-under with rounds of 67, 70, 66 and 70. 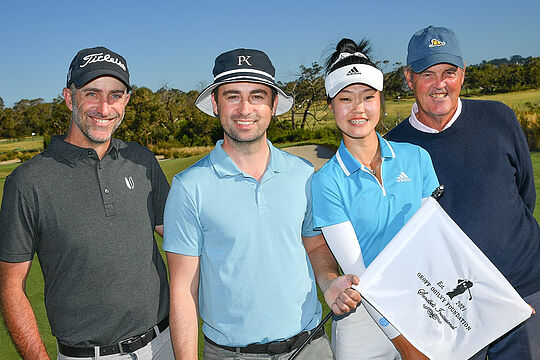 “I’ve waited a long time to be a winner, a four round event, my first as a pro, extremely satisfying,” said 31-year-old Watt.

“The icing on the cake was holing the putt on the last. I didn’t know all day until walking up the last that I had a five-shot lead. It is a weird feeling standing over the putt thinking, ‘You might as well make it’. That grandstand finish, everyone wants that feeling, it is the best feeling.”

“I think this is definitely an eye opener for where my game is at the moment. I am really looking forward to all the summer events. I guess, bring it on,” said Kim, who narrowly missed qualifying for the LPGA Q-School Finals last October.

This was not your ordinary 72-hole event, though. The brainchild of Geoff Ogilvy and Mike Clayton, the Sandbelt Invitational was played one round per day across four courses – Kingston Heath, Royal Melbourne (West), Yarra Yarra and Peninsula Kingswood.

The impetus for the tournament was two-fold; offer an opportunity for young golfers to play competitive golf and to showcase the world-class layouts on offer in the Sandbelt region of Melbourne.

“Like everyone else in Australia, Mike and I were getting a bit disillusioned by the number of tournaments disappearing from the schedule because of the on-going COVID-19 pandemic. We had been able to host some small events…but we wanted to do more,” said Ogilvy, who finished in 17th place at 7-over par.

“Another benefit: with this event we will be highlighting and showcasing the Melbourne Sandbelt, something we haven’t really done for the last 20 years. We’ve had the Presidents Cup, but the Australian Tour is not what it was, so we haven’t been utilising our assets as much as we should.”

“We’ve gone down the road of thinking we need to run really big events with one or two star names, all paid for by government. Instead, we should be running fundamentally good tournaments on great courses and see what happens. Trying to keep up with the golfing Joneses got us on the wrong track.”

And judging by the overwhelmingly feedback from both players and fans, this won’t be the last we see of the Sandbelt Invitational.