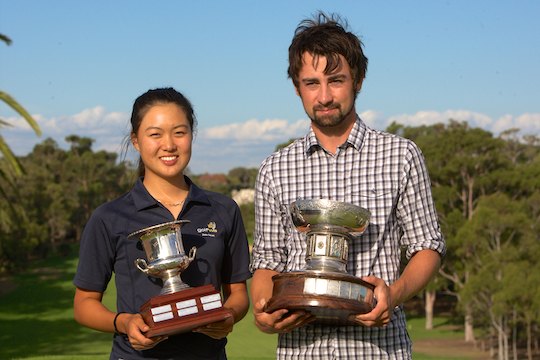 With the victory Watt moves closer to claiming the World’s Number 1 position, yet was humble in a victory close to his heart.

“To get a home win front of my family and friends, I treasure it more,” said Watt.

“To have them here and see them all happy and enjoying my golf makes the win priceless.”

Watt’s form this season has been nothing short of stunning.

Victories with the Keperra Bowl, Riversdale Cup and Dunes Medal, are but a few of the recent accomplishments by the world’s number two.

Watt is next scheduled to play in the Australian Interstate Series in Hobart in May before heading to the UK and US.

“The recent hard work with my coach Craig Bishop and trainer, John Polley, has shown I can compete against the best of the American and European players.”

“As to getting the Number 1 ranking – it would be a nice recognition of my form and show that I’m on the right track, but it’s not like my main goal at present.”

For Lee, she will also be heading to the US to defend her US Girls’ Amateur title and hope to challenge rival Lydia Ko of New Zealand for the US Women’s Amateur title.