Brady Watt fired rounds of 67-68 to be at 9-under-par for a two stroke lead over Geoff Drakeford following the second round of the Australian Master of the Amateurs at Royal Melbourne.

Watt has played peerless golf over the famed West Course with precision driving and subtle putting on the ever quick Royal Melbourne greens.

It defies belief as to why the talented Western Australian and world number 16 has not been recognised by Golf Australia for inclusion in their National Squad. Surely Watt’s recent run of results has met the criteria established by the governing amateur body to get recognition for squad inclusion.

A twice winner this year with the Keperra Bowl and Dunes Medal and a runner-up in a play-off on an Australasian PGA Tour event, Watt’s consistency in major events has been nothing short of impressive.

Watt is also currently the highest ranked Australian world amateur at 16th on the R&A World Amateur ranking – three above Oliver Goss who has moved to play the US collegiate system.

Watt has positioned himself perfectly at Royal Melbourne, yet is not getting too carried away with where he stands. 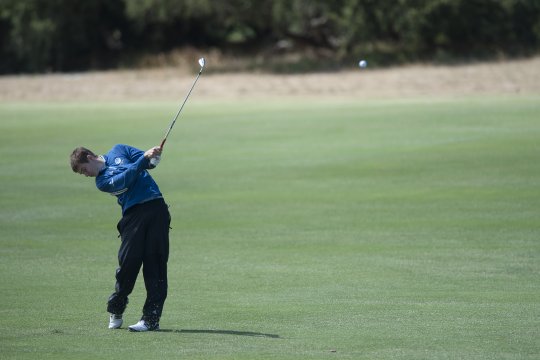 Scotland's Ewan Scott returned at 71 after the second round of the Australian Master of the Amateurs at Royal Melbourne (Photo: Anthony Powter)

“There’s still plenty of golf left, but it is nice to again be in contention to win,” said Watt following today’s second round.

“I played a lot smarter today, the breeze was getting up and you had to manage your way around. I feel that I have a good game plan if I keep what I’m doing going. It is about giving yourself an ‘up-hiller’ on the greens and playing smart.”

Geoff Drafkeford struggled a little with his game during the early stages of today’s round when conditions where challenging, but to the Victorian’s credit held on to record an second round 2-under-par 70 after opening with a 67 to be at 7-under.

Drakeford is in second position and a stroke ahead of Canada’s Garrett Rank who has a one stroke advantage over France’s Teremoana Beaucousin and Scotland’s Ewan Scott. 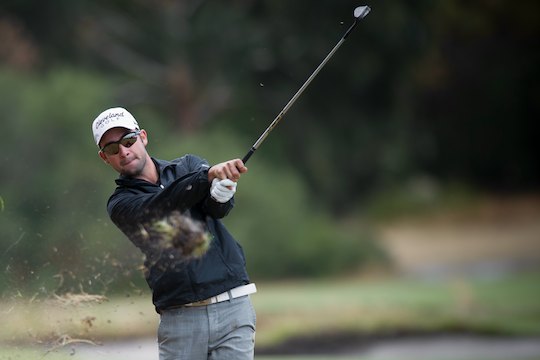 Brady Watt has a two stroke margin moving into the third round of the Master of the Amateurs at Royal Melbourne (Photo: Anthony Powter)

Joint overnight leader and defending champion, Nathan Holman fired a 3-over-par 75 to move back into a share of 7th position at 2-under along with Germany’s Max Roehrig and Aussies Todd Sinnott and Jordan Zunic.

American Richard Lamb is in fifth position at 4-under with Olaf Allen, Viraat Badhwar, Garrick Porteous and Aussie Ryan Ruffels at 3-under.

China’s Tianlang Guan found the windy conditions challenging on his way to a 4-over-par 76 after opening with a 68. The Asian Amateur champion struggling at times to control his ball flight on the wind swept Royal Melbourne layout after being put on the clock following a very slow opening round that caused considerable delays for the field behind.

Unlike the conclusion of the opening round which had ten players within three strokes of the leaders, Watt second round 68 has broken him away from the field.

Whilst there is two rounds remaining and anything is possible around this superb West Course layout, Watt does not look to be going backwards. The rest of the field are left with doing the chasing.

Watt’s game is solid, with minimal mistakes. Fairways, greens and keeping the ball under the hole have been his game plan.

“You have to play smart,” says Watt.

“I love being in front. But you need to respect this layout and play into position. Then you will score and that’s my plan tomorrow.”

That sounds pretty perfect if you are to score around Royal Melbourne and at present, Watt is the player to catch.